Gerry Thornley: Murphy and Keatley to start against Italy 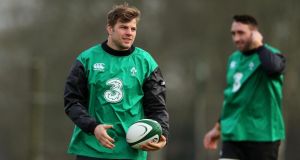 Leinster’s Jordi Murphy is in line to start at number eight for Ireland against Italy. Photograph: Ryan Byrne/Inpho

Jordi Murphy and Ian Keatley are in line to make their full Six Nations debut against Italy on Saturday pending Joe Schmidt’s team announcement for Ireland’s opening defence of the title. In addition to Johnny Sexton, who is due to be available for the game at home to France on Saturday week, this game appears to have come too soon for Jamie Heaslip.

The normally indestructible Leinster number eight is apparently still troubled by the shoulder injury which, most unusually for a player who invariably completes 80 minutes for province and country without fail, has failed to last the distance for Leinster’s last three games.

Heaslip has played in 34 of Ireland’s last 35 games in the championship, the exception also being the opener in the Stadio Flaminio four years ago when Ireland came through by 13-11 thanks to a late Ronan O’Gara drop goal.

Rather than risk him this weekend, there are also, of course, another four games over the ensuing six weeks, beginning with the home game against Ireland’s other pool rivals, France, at the Aviva Stadium on Saturday week.

In his possible absence, and with Robin Copeland also absent, the options for Schmidt and co were not plentiful at number eight, and rather than move Peter O’Mahony across, it appears as if the Irish management are set to start Murphy in the position where he has played much of his rugby. Murphy has also found his form in recent games for Leinster after also returning from injury.

Rather than opt for Tommy O’Donnell alongside Murphy as another young backrower to make his first Six Nations start, the Irish management have been encouraged by Seán O’Brien’s 50-minute cameo last Friday night for the Wolfhounds against the Saxons – his first outing since September – as well as his form in training.

In the post-Brian O’Driscoll era, when all options were available for the one and only time in the opening autumnal game against South Africa, Schmidt opted for a partnership of Robbie Henshaw and Jared Payne. There seems little reason not to have another look at this preferred option, despite the good form on returning from long-term injuries by Keith Earls and Luke Fitzgerald. The back three effectively picks itself.