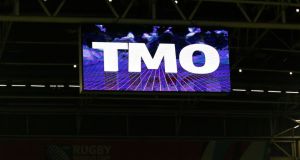 A TMO interlude is announced during the Ireland v Canada clash at the Millennium Stadium in Cardiff. Photograph: Andrew Boyers/Reuters/Livepic

The England 2015 organisers couldn’t have scripted a better first weekend if they tried. An entertaining enough opening night win for the hosts, full grounds, good weather, entertaining rugby, a heavyweight collision between New Zealand and Argentina in front of a world record crowd and, of course, a centrepiece that constituted the biggest upset in the history of the sport. Follow that.

At a stroke, and apart from South Africans, Japan have become everyone else’s second favourite team. Japan’s win over the Springboks not only shook this World Cup, and generated even more interest from the first weekend than would have been the case, but even passed a nod toward the next one in Japan four years hence. The Japan 2019 organisers could not have scripted it any better either.

The most contentious issue to date, has been the enhanced use of the TMO. Too enhanced in some minds.

Clearly fully cognisant of the TMO’s enhanced role, the South African referee Jaco Peyper did not seem to be enjoying himself at all in Twickenham and helped to ensure a slow early pace in the England-Fiji game with oft-repeated and often interminable recourse to video replays.

You have to have some sympathy for Peyper given World Rugby’s clampdown on neck-high clearing out at ruck time and using the arms when doing so. Yet his performance was most heavily criticised for him awarding Nikola Matawalu a try without reference to the TMO.

Only when the big screen TV replays showed celebratory replays of Fiji’s ‘try’ did a third, arty angle adjacent to the corner flag reveal that the ball had slipped briefly from Matawalu’s grasp before he then touched down.

This is not the first time a referee has been moved to change his mind and seek recourse to the TMO, whether from the roar of the crowd, seeing the big screen replay himself or as is now the case, the TMO bringing something to his attention.

World Rugby allows all the officials to use any technological assistance which is available until the conversion is taken. It was undoubtedly unfortunate for the Fijians that Matawalu’s try was ruled out on the whim, effectively, of a television producer, and the increasing influence of ‘home’ TV producers in conjunction with home crowds is regrettable.

The bottom line though is that this roundabout and unsatisfactory way prevented an illegal try being ‘correctly’ disallowed or overruled. It is still not ideal, but the more correct decisions the better.

And let’s be honest, to every naked eye in the stadium, it looked like a perfectly legitimate try by Matawalu. It’s hard to be critical of Peyper for initially awarding the score. There is a clamour for referees not to needlessly refer to technology. They are damned if they do, and damned if they don’t.

There was a similar example in the France-Italy game when a try by Noa Nakaitaci was awarded after recourse to the TMO, but then was referred a second time after another camera angle had shown the French winger had also knocked on in the act of touching down. Once again the TMO was the South African Shaun Veldsman. And here’s one South African to whom it can be said: “Well done.”

Yet once again the correct decision had been reached, and if you were Italian, you would have been grateful for that. After all, think back to the Millennium Stadium when Ireland played Wales in the 2011 Six Nations and Mike Phillips scored from an illegal quick throw by Matthew Rees.

The Welsh hooker had used a different ball and had taken the quick throw from a point in front of where the ball had crossed the lined, both of which are not permitted in the game’s laws. Jonathan Kaplan had a perfect view of the illegal quick throw, yet was content to merely ask the Scottish touch judge Peter Allan if it had been the same ball. Allan in turn wrongly said it was and the try stood. It was also converted and Ireland lost by six points.

That incorrect decision, without recourse to technology, effectively decided the match in Wales’ favour. As Les Kiss said on Monday, he would have liked technology to have been used in that instance.

It has to be better that there are less decisions like that one and more correct ones. For sure, no-one wants endless recourse to video replays, not least for what has been in some cases perfectly legitimate clearing out. It may also be the case that officials, especially referees, will feel obliged to justify taking recourse to the TMO by then punishing players.

With all of this has almost come an unofficial ‘appeals’ or ‘challenge’ system, with players beseeching referees to look upstairs. This in turn has undermined their authority and added to the needles referrals. For example, even at the time, it seemed faintly ridiculous that Glen Jackson felt obliged to seek video confirmation of Johnny Sexton’s try on Saturday when the outhalf had clearly touched down before reaching the touchline.

But when it comes to tries, it has to be preferable that the correct decisions are reached rather than wrong ones. One of them could, after all, decide a World Cup.

Of course, referees need to be helped more by their touchjudges, and back themselves when sure. The last thing the coaches, players or supporters want, is matches dragging on and on to more than 120 minutes, and inch closer to American Football.

Jacob Stockdale back in Ireland squad ahead of Scotland clash 10:50
Solskjær says Man United ‘suffered’ to end City’s streak 10:06
All in the Game: Paul McGrath is a God in Ghana 10:00
The Offload: Red cards ruin games - head injuries can destroy families 10:11
Ken Early on floundering Liverpool; McFarland frustrated with Warwick red card 07:19
Crossword Get access to over 6,000 interactive crosswords