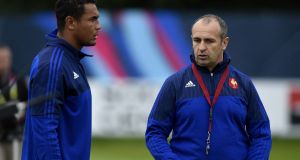 No team spooks the All Blacks at the World Cup quite like the French, and with good reason.

Anyone lucky enough to attend the match-up between these two in the 1999 semi-final at Twickenham or the quarter-final in this same Millennium Stadium eight years ago when France mugged New Zealand again will testify that they were two of the greatest World Cup games ever.

About the most disconcerting thing to discommode the All Blacks this time around were reports of a mutiny in the French ranks against head coach Philippe Saint-André, akin to the one of four years ago which saw Les Bleus respond from pool defeats to New Zealand and Tonga to come within a point of New Zealand in the final at Eden Park.

The story was based entirely on one article by a Parisian-based political writer Serge Raffy, who amongst other things had written a book on French president Francois Hollande and has not been to the World Cup. There is speculation that the source for the story was Toulon owner Mourad Boudjellal.

The lack of a mutiny is not surprising given the contrasting make-up of the two squads. Four years ago, the French squad were riddled with experienced Test players and club captains, such as Dimitri Yachvili, Aurelian Rougerie, Damien Traille and more. This squad is younger, less experienced and more dutiful to their coach. More the pity.

Hence, more to the point, there’s been nothing to suggest an inspired performance and coup akin to 1999 or 2007, in this World Cup or even in the last four years under the watch of Saint-André.

In between the last World Cup and this one, France played 40 games under him, winning 17, drawing two and losing 21. Finishing in the bottom half of the Six Nations in each of his four campaigns.

There is tension in French ranks, amongst the coaches and between them and the players. The scale of the defeat to Ireland scarred them emotionally. It took them two days to remotely recover.

“We’ll have to take into our hands our own destiny, to impose our game,” said Saint-André. “If we want to beat New Zealand, we will have to play the French way. We’re getting ready for a massive battle. We know we’ll have to improve our up-front game and take more individual initiatives.”

Unfortunately there hasn’t been the remotest hint of “the French way”, whatever that means any more, nor any individual initiatives. The French team that recovered from a 24-10 deficit against a Jonah Lomu-inspired in ’99 had Fabien Galthie, Christophe Lamaison, Christophe Dominici and Philippe Bernat-Salles, as well as forwards like Abdel Benazzi.

The team of eight years ago had Frederic Michalak, Yannick Jauzion, Vincent Clerc and the indomitable Thierry Dusautoir, a try scorer who made 38 tackles. Toulouse men of steel and style. That was a brilliant All Blacks side, but France had won three of the previous four Six Nations, and were reigning European champions. This team has an older Michalak and an older Dusautoir, and no pedigree.

For sure, Saint-André has delivered on his promise of bringing a big, physical and fit French side, after pumping iron in the Pyrenees. But there has been scarcely any sign of being coached – be it a system of play, strike moves, decoy runners, anything. If they don’t beat up their opponents in the scrum and in the collisions, they have nowhere else to go.

The All Blacks have not been at their best, making basic mistakes, leaving chances behind and missing tackles. There is a question mark about their scrum, where Wyatt Crockott starts after being called up for the injured Tony Woodcock. There are signs that key components in a starting side may be past their best, be it Richie McCaw, Dan Carter or Conrad Smith.

But they are proven big-game players and there were signs in the last quarter last time out against Tonga that they were rediscovering their old mojo. As with their opening win over Argentina, they again saw the game out strongly.

The All Blacks still want revenge for eight years ago, and have more survivors from the final four years ago when France slightly rained on their parade. And if New Zealand start pulling away, with Williams to rub salt in the wound, it could even be one helluva beating.