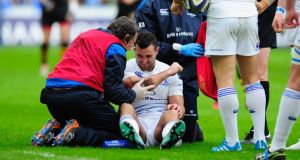 Leinster player Dave Kearney receives treatment in the first minute of the game after being upended by Wasps flanker Ashley Johnson at the Ricoh Arena. Photograph: Stu Forster/Getty Images

Dave Kearney and Eoin Reddan are likely to miss the start of Ireland’s Six Nations title defence after suffering injuries as Leinster squeaked through to the Champions Cup quarter-finals at Wasps.

Wasps rallied for a 20-20 draw with 14 points in the final quarter and now their hopes of reaching the last eight rest on results elsewhere across the weekend.

Wing Kearney picked up a “significant” shoulder problem after being upended while in mid-air by Wasps flanker Ashley Johnson, who received a yellow card for the first-minute challenge.

Scrumhalf Reddan trudged off with knee ligament damage as Leinster blew a comfortable lead, and head coach Matt O’Connor admitted both Reddan and Kearney are doubts for Ireland’s Six Nations opener in Italy on February 7th.

“Dave (Kearney) has got a bang on his shoulder. It’s significant and he could be out for several weeks,” O’Connor said. “Eoin Reddan has a medial strain on his knee.”

Johnson was fortunate to escape a red card for upending the airborne Kearney after just 24 seconds of the match.

“I don’t know whether it was right or wrong. A bloke takes a guy out illegally, and we lose a guy which compromises the bench, and they lose a bloke for 10 minutes.

“There is a duty of care on the player to make sure guys land safely.”

Leinster’s Ireland number eight Jamie Heaslip also came off in the second half, but O’Connor is confident he can carry the niggle into Six Nations action.

“Jamie’s still carrying that shoulder. He was struggling a little so fresh legs were going to be important.”

While Leinster secured safe passage to the last eight, Wasps must now hold their breath for the rest of the weekend to see if they can claim a best runner-up spot.

Leinster raced into control through tries from Fergus McFadden and Isaac Boss, but Matt Mullan and Nathan Hughes hit back at the death.

Ian Madigan missed four penalty goals while Andy Goode failed with a last-play drop-goal attempt that could have won the match.

“I was hoping we’d just hold on and Goodey would miss,” O’Connor said. “We defended very well. I thought our defence was outstanding against a very, very dangerous side, for the most of it.”

Wasps boss Dai Young said he will not tune into the television coverage of the rest of the weekend’s action that will decide his side’s fate.

“Sarries and Bath are in the mix, but we need teams to do us favours.

“If we do get a bit of luck, we’d be thrilled to be in the knockout stages.

“I think we’ve shown our quality. Everyone wrote us off after we lost our first two games.

“If it’s not enough, it should make us all the more determined to come in that top six in the Premiership and have another crack at it next season.

“I’m sure we’ve learned from the whole experience and will be better for it.”

Young believes referee Jerome Garces made the right call in handing Johnson a yellow card for the early challenge on Kearney.

“It didn’t help our cause that’s for sure. It takes the wind out of your sails when you want to start big and it means you’ve got to patch up in other areas.”

1 Waterford turn Kilkenny upside down and inside out
2 Jim McGuinness: There is a way to save championship and make it competitive
3 Waterford’s frenzied waves of attacks too much for Kilkenny
4 Ireland’s work-ons: Four things Andy Farrell needs to address
5 Klopp furious as injuries mount and VAR decisions prove costly
Real news has value SUBSCRIBE