Country v provinces: who is really calling the shots in Irish rugby?

Putting the national team first is all about revenue, but the Pro12 suffers as a result 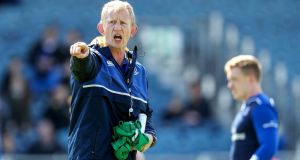 Leinster head coach Leo Cullen: is instructed what number of minutes he can select Ireland players for. Photograph: Ryan Byrne/Inpho

The IRFU are very clear on this: Irish rugby survives off the international game. Filling the Aviva Stadium pays players’ wages and keeps the entire machine motoring.

Too big to fail almost. The provinces, however, are not. If Champions Cup success is a victim of international success, even if it was once the catalyst for it, well, so be it.

Ireland play four test matches in November: three in Dublin and the AIG-sponsored event at Soldier Field, Chicago. The insurance giant is branded on the All Blacks jersey. This additional fixture means the Pro 12 suffers, as do the provincial coaches, because the Champions Cup takes precedence over the league.

If you want to know who will be in the Ireland 23-man squad that takes the field against New Zealand on November 5th, then flick through the teams that run out at Ravenhill and the RDS the previous weekend.

All or most of the Irish XV will be wrapped in cotton wool in the stands despite Ulster versus Munster and Leinster versus Connacht potentially being season-defining matches.

“We want to encourage the fan who might just go to the Aviva Stadium for international rugby to come week in, week out and buy a season ticket to come see the Guinness Pro 12,” said Martin Anayi, chief executive of the Pro 12. “That’s the thing that is going to put bums on seats. In a survey we conducted, 40 per cent of the fans want to see their international players playing for their club. That’s a great statistic to wave in front of anyone who wants to listen.”

Well, we know who is not listening. The interprovincial derbies are supposed to be what drives the Pro 12 – now established as the only route into Europe – yet the best Irish players will be on ice.

There may be an exception or two if, say, Robbie Henshaw or Peter O’Mahony need another 40 minutes, but marquee players being hauled off during games that are supposed to drive a competition, as we saw with the returning O’Mahony over the weekend, delivers a clear message: Joe Schmidt’s Ireland management calls the provincial tune. David Nucifora guarantees this.

Leo Cullen, Rassie Erasmus, Les Kiss and Pat Lam are instructed what number of minutes and, in some cases, what specific games they can select their Ireland players for.

The four provincial coaches have to survive within these rules, with Cullen knowing when he can and cannot select Johnny Sexton and the other 18 Leinster players that joined the eight Munster men in Carton House last Monday.

“We are trying to manage the players as best we can,” said a magnanimous Cullen. “They are not public but there are certain requirements about guys’ minutes and games. We need to be able to manage guys so they can go hard and give an account of themselves.

“We are not going to see the same 15 week on week. It’s about keeping them all healthy.” For Ireland.

The same questions were put to Kiss last week and he responded in a similarly non-Matt O’Connor way. We know the rules and will make do within the system. O’Connor, the former Leinster coach, signed his own expulsion papers when tearing into Team Joe as he grew increasingly frustrated by having to select, for example, his third choice loosehead prop as crucial Pro12 points began slipping from his grasp.

The value of provinces reaching such European heights appeared to manifest itself in international success. Link five European Cups from 2006 to 2012 to three Six Nations titles from 2009 to 2015.

In the meantime, giving the provinces everything they need to be successful has been significantly curtailed. It remains unclear if Irish rugby has chosen the correct path.

Schmidt cannot afford to care as he hones in on New Zealand, Canada, New Zealand again and then Michael Cheika’s convalescing Wallabies.

Because a successful return from these matches is what drives the machine. Beating the All Blacks just once would justify everything.

That is how Six Nations tickets are flogged, especially in 2018 when Italy and Scotland come to Dublin, because that’s what is needed to balance the books.

Players will not be flogged so Cullen can grow into a top coach or Erasmus can rebuild the Munster army or Kiss finally bring some silverware to Belfast or Lam see Connacht defend the Pro12.

On the contrary, the provinces are punished for success.

“Ireland is going to go from strength to strength,” said Paul O’Connell in the Sunday Times yesterday. “Provincial-wise it is going to be tougher, the landscape has changed, but internationally we are in a very good place.”

Could be worse. Could be England. Word has it that there was no heavy contact in the Carton bubble last Monday. Just tactical homework. Of which there is plenty under Schmidt’s watch.

England camp went the other way. Sam Jones returned to Wasps with a broken leg following a judo session, while Anthony Watson returned to Bath with a fractured jaw.

Despite the RFU paying their clubs £25 million (€27.76 million) for increased access as part of an eight-year elite player agreement, Saracens director of rugby Mark McCall branded the decision to have an England camp 10 days before the first Champions Cup games as “flabbergasting”.

“Premiership Rugby need to be careful chasing all this money if it comes at the expense of the clubs who need to be strong and fight their corner as the RFU will fight theirs for the international game.

“I was part of a system in Ireland where the Pro12 became a bit devalued because the bigger international players did not play for their teams on a consistent basis.”

All the pieces matter. This comes back to player welfare, leading into the concussion issues and foggy therapeutic use exemption (TUE) debate before the carousel arrives at the possibility of a streamlined global rugby calendar.

Anyway, them’s the rules. The policy of national team over provincial success is the financially viable model. It comes under the European microscope this weekend as four French packs come a-bludgeoning.