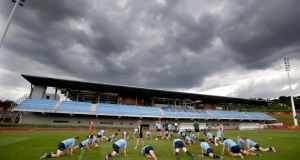 The Ireland women’s rugby squad on their captain’s run at FFR headquarters in Marcoussis, Paris, ahead of their World Cup pool game against world champions New Zealand at the same venue this evening. Photograph: Dan Sheridan/Inpho

Ever tried. Ever failed. No matter. Try again. Fail again. Fail better. Beckett was right and that’s probably all the Irish women’s rugby team can do this evening but failure, the whole concept of it, simply isn’t part of their conscious thought.

Even when faced by the ultimate challenge. The world champions, the Black Ferns, finely tuned athletes and in Amiria Rule a devastatingly creative and powerful fulcrum at No. 12 who weighs 92 kilograms.

New Zealand are a fabulous rugby team but hopes spring eternal in camp Ireland. And why shouldn’t it? Proof of their vastly improved physical conditioning - Marian Earls has been recruited by Connacht for next season - is best shown by all 26 players being available for selection (also take a bow physio Dom Hoban).

Despite the attritional nature of the Niamh Briggs inspired 23-17 victory over the USA last Friday, which included a typically corrosive cameo from Jenny Murphy, coach Philip Doyle has made just one change with Paula Fitzpatrick replacing Siobhan Fleming at blindside flanker.

“Ball carrying,” said Doyle. “Paula’s a good rugby player in general who knows where the try line is. I just need a six with ball skills and ball carrying capacity because we know what’s coming.”

Murphy’s continued exclusion is a massive compliment to the defending of Ulster’s Grace Davitt.

“Jenny can come on and change the game. As we saw. She’s a valuable impact sub that brings an injection of energy when we’ll really need it.”

Ireland committed far too many unforced errors against America.

Handling was poor at times, the tackle technique too high. A combination of these lapses in concentration will lead to a heavy, punishing defeat here.

“We don’t want to be giving them the ball,” Doyle continued. “It will be about finding touch, playing for field position and then holding onto possession. I do think they have weaknesses in places, trying to exploit them is going to be hard.”

Ireland will surely attack New Zealand’s lineout but that means the kicking from hand by Nora Stapleton, Briggs and Tania Rosser - winning her 50th cap against her native land - must be pinpoint. Otherwise the rapid counter attacking Black three quarters will score tries. Lots of tries.

Fiona Coghlan’s pack have to be confrontational from the kick-off. You saw the value of that attitude from Joe Schmidt’s men last November.

“No team likes to be pushed around. They are a lot more direct than they used to be. They have a big pack and like to maul, just like we do.”

What makes New Zeland so special though is the combination of power and Sevens flyers like Kelly Brazier, Selicia Winiata and Honey Hireme.

“Like any New Zealand team they always go for the space if it’s there.

They do a lot of work to create it.”

Concentration is everything for Ireland, a lack of which cost them two tries against America and, as Coghlan pointed out, from 15 first-half possessions the US punctured their gainline 13 times.

“We’ve looked at that and addressed it,” said Doyle. “We were sitting back, not up off the gainline hard enough, not eating up their space.

That has to change. But it wasn’t terrible and our chop tackling was good at times.”

So that has to be firmed up. No free scores. Briggs kicked 13 of the

23 points the other day but missed a late penalty and a drop goal attempt skewered off her boot. Everything has to go over today.

It would also be hugely valuable to see Claire Molloy, arguably Ireland’s technically best player, causing havoc at the breakdown. But the fear is she will be blow away.

Size always matters in rugby but that lesson was well learned already this season at Twickenham, down in Pau and against America.

“This year’s Six Nations was really valuable. Without playing particularly well we stayed with England and France. Neither of them are that far away from New Zealand. They were two huge lessons in how not to play. We just got to stick to the task in hand.”

A bonus point defeat would be failing better than they ever have. In fact it wouldn’t be failure at all and would leave them on course to make the semi-final.