Brian O’Driscoll regarded as a wizard in Oz 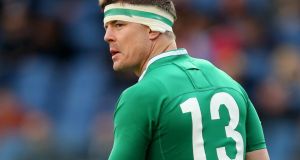 Brian O’Driscoll: “Maybe it’s because he carries on as if he is one of us. He likes fun. He likes the sun. He likes a drink. He likes being perched in the public bar, singing, having a good time with his mates. He appears not to take himself too seriously.”

Northern Hemisphere rugby players, who believe they’re of rock star status, should never convince themselves they have any presence on the other side of the globe, especially Australia.

While their every move, every utterance may be fawned upon in Europe, and they may even get a nod and a wink in New Zealand or South Africa, not so in Australia. Usually they draw a blank in Oz.

There are too many football codes and a cascade of athletic conquerors for the discerning Australian sportophile to show any interest in a supposed European rugby immortal.

They could even be the star attraction in a lunchtime motorcade going down Sydney’s main thoroughfare – George Street – and only a few locals would care or even stare.

But there are a few exceptions where genuine star quality would attract a crowd. Martin Johnson couldn’t hide anywhere in Australia – simply because he is enormous, and locals would want to prod him to see if he was human or something else. Ieuan Evans would be pestered, primarily by irritable Wallabies fans still seething that David Campese threw that dumb pass in that Sydney British and Irish Lions test all those years ago.

Brian O’Driscoll is the other. Of those northerners who have travelled this way in recent decades, O’Driscoll would easily be the most recognisable.

Maybe it’s because he has been a prominent feature on our television screens for so long. He’s either playing or perched centre of screen at a media conference, praising everything concerned with Australian rugby. What he utters is an oft-repeated, word-perfect script. He immediately mentions the Wallabies and the word “smart” in the same sentence, and the locals react the same way each time. They start drooling. As he has said it so often, maybe he believes it, and well maybe it could be right.

Maybe, just maybe we’re actually smart. Flattery will get him everywhere in this part of the world.

Maybe it’s because he carries on as if he is one of us. He likes fun. He likes the sun. He likes a drink. He likes being perched in the public bar, singing, having a good time with his mates. He appears not to take himself too seriously. Most crucially when he’s in the public gaze, he doesn’t carry on like a prima donna. Australians like that. They give short shrift to liars.

Maybe it’s because he has been sighted in our newspapers revelling with some of our best, some of our most notorious. A few years ago, there he was arm and arm with one of our most prominent football products, Andrew Johns. John was a masterful rugby league player, a George Best of the 13-man code, who has sadly experienced similar misfortunes off the field.

You have to remember that Australians, a colony that thrived on convict blood, respect the disrespectful, the mischievous. After all, only Australia would treat as one of its most important national heroes an Irish bushranger called Ned Kelly, who wreaked havoc in the Victorian and New South Wales country regions before losing out in a police shoot-out back in the 1880s.

Virtually every Australian knows Kelly’s final words, uttered just before he was hanged in Melbourne. “Such is life.”

Big night
Such was life when Johns met O’Driscoll in the dressing rooms after the Ireland-All Blacks Test in Auckland in 2006. Later that night they bumped into each other again. O’Driscoll was perched in the corner of an Irish bar. They were soon a tag team, dancing about, entertaining the locals and singing traditional Irish songs. Johns later rated the night in his top five. That’s an enormous call, because Johns has had many big nights.

But overall it may just be because of O’Driscoll’s sporting prowess, and how often he has chosen the perfect moment to jolt Australia. Australians gravitate towards the clever performer with impeccable timing; the rare breed that keeps us honest. O’Driscoll is certainly that.

There he was in Brisbane during the 2001 British and Irish Lions series just taking off, making every Wallaby look silly. His solo try from half-way ensured that Test was over well before full-time.

As telling was in 2009 at Croke Park. The Wallabies looked as if they had it won, until Ireland pulled them back in the final minute with the finest of hoodwinks.

Ireland backs coach Alan Gaffney taught O’Driscoll and co an old Randwick Rugby club move – one which had been used so effectively by Mark, Glen and Gary Ella in the Sydney grade competition during the 1980s.

Basic loop passes and a cut-out enabled O’Driscoll to scamper between Quade Cooper and Digby Ioane to score and see the Test end in a draw. The Wallabies watched on in wonder – beaten by a manoeuvre devised just down the road from Bondi Beach. Too good. You could only laugh.

Greg Growden is the Australian correspondent for ESPN scrum.com.