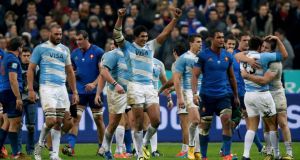 Argentina confirmed they are a bete noir for France when they play in Paris by kicking four drop goals, including three by flyhalf Nicolas Sanchez, for an 18-13 upset victory tonight.

The Pumas had lost on their three previous visits to France but made it three straight wins in the capital after twice beating the hosts at the 2007 World Cup where they came third.

France, fresh from a 40-15 win over Fiji followed by a 29-26 victory over Australia, fought back in the second half and scored the only try through centre Wesley Fofana.

But, having changed ends 15-3 down, they found the Argentine defence too strong and did not get enough breaks to turn the match their way despite more possession.

Argentina, who have won three of their last four tests, stunned the French with three drop goals in the first half, including one from centre Juan Martin Hernandez, and two penalties by Sanchez, who finished with a tally of 15 points.

It was an encouraging year-ending result for Argentina who secured their maiden Rugby Championship win against Australia in October, then lost 41-31 to Scotland and beat Italy 20-18 in their two previous tour tests.

Sanchez put Argentina in front after a minute with a penalty and enterprising play from the Pumas nearly brought them an early try but wing Juan Imhoff was bundled into touch at the corner flag.

Argentina’s fine kicking game then continued with the first of Sanchez’s drop goals in the 17th minute after flyhalf Camille Lopez had missed a penalty for France.

The Pumas lost centre Marcelo Bosch with a shoulder injury and soon after number eight Leonardo Senatore had to come off with uncapped Tomas Lezana taking his place in a pack with several raw youngsters.

France’s South African-born fullback Scott Spedding then saw his long-range penalty come back off the upright and the Pumas pulled further ahead with another Sanchez penalty.

Hernandez kicked a sublime drop goal just before the half hour to give Argentina a 12-0 lead and Sanchez put over his second two minutes later.

France finally got on the scoreboard with a penalty by Lopez before halftime but the Pumas pulled away again six minutes into the second half when Sanchez completed his hat-trick of drops.

The home side finally had something to cheer when Fofana went over for the try, taking a short pass by replacement scrumhalf Rory Kockott from a maul with Lopez converting.

Kockott then put over a penalty which left France, who tried to run two penalties close to the Pumas line in the dying minutes, needing a converted try for victory but Argentina held them off.

Spedding crossed at the death but went down on his back and the referee ruled out a touch down, sparking celebrations among the Argentines.