Anthony Foley: Tyler Bleyendaal ‘not a piece of meat’ 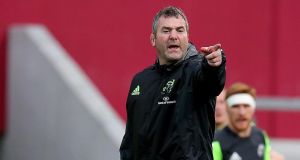 Munster head coach Anthony Foley: “If a player has committed to us in terms of contract we need to make sure we are looking after this player as well.” Photograph: Dan Sheridan/Inpho

Tyler Bleyendaal is not a piece of meat. The Cabtabrian is, however, a professional rugby player with a serious neck injury.

Last night Munster coach Anthony Foley was at pains to highlight the human aspect of this situation, but the 24-year-old’s proposed move to Ireland on a three-year contract remains shrouded in doubt.

“We as a club need to look after the player and it’s not a piece of meat we are dealing with,” said Foley.

“It’s a human being, so there is a human side to this that we need to manage, and that is what Munster is about, it’s about the people. If a player has committed to us in terms of contract we need to make sure we are looking after this player as well.”

Foley also revealed that Bleyendaal was due to sign for Munster in 2012 only for the move to be scuppered by a previous injury.

“It was a quad tear or something like that. He did it in the ITM Cup final.”

The New Zealander, who can qualify to play for Ireland through residency, is to undergo surgery that places his career in some doubt but Foley still hopes to eventually build his midfield around him in the “second five eight” role.

A genuine talent, unlike anything Munster currently possess, who captained New Zealand to the under-20s world cup in 2010, Bleyendaal has struggled with a prolapsed disc in his neck for the past four weeks.

“It’s a weakness down his arm, and it got to a point where he couldn’t play,” Foley explained.

It is also unclear when the player can leave Christchurch or if any of his rehabilitation can take place in Ireland.

Munster may even be forced to make another visit to the market for a short-term replacement.

All told it feeds into the difficult opening months of Foley’s reign as head coach of his native province.

Defeat to Edinburgh at home in last weekend’s Pro 12 game reignited the email controversy of pre-season when a critical management review of the players was accidentally emailed to the players.

“Get them all out of the way early!” said the 40-year-old. “No, injuries happen, it’s in the game. Emails gone awry, that happens.

“We’ve addressed that. That was put to bed by us a day after it happened. It was obviously brought up again. It hasn’t been an issue.

“Last week’s defeat was down to Edinburgh coming out and playing well and we didn’t turn up physically in our home ground.

They seek atonement in northern Italy tomorrow against Treviso, a place that has proved Munster’s undoing on three of the last four journeys.

The other incident yesterday, which Foley didn’t feel had news value, was newly-acquired number eight Robin Copeland conceivably missing out on his debut after his passport was stolen on Tuesday night. It was taken from his car.

“If Robin doesn’t tweet it isn’t another piece of news. This sort of thing happens all the time, fellas forgetting passports. We had the right people involved to get it sorted.”

At least Paul O’Connell will feature tomorrow as the Ireland captain, who turns 35 next month, makes an earlier than usual seasonal bow in the red jersey.

“I want him to get into the season, I want him to be happy where he is at, I want him to contribute to the team, bring his leadership. There are still a lot of young guys in and around. Obviously you want that experience to be transferred to others, hopefully bring that calmness that comes with experience.”

Meanwhile, Kane Douglas is due to arrive in Dublin next week, but the Wallaby lock is not expected to feature for Leinster until the Cardiff game on September 26th or even Munster at the Aviva Stadium on October 4th.

1 Tipping Point: DeChambeau’s transformation raises questions, but who will ask them?
2 Different Strokes: Frankie leaves Fleetwood for Hollywood
3 Rory McIlroy: ‘It sort of sucks going off in the middle of the pack on a Sunday’
4 Trent Alexander-Arnold’s ‘genius moment’ summed up Liverpool
5 World Athletics freezes out Russian athletes after $5m fine goes unpaid
Real news has value SUBSCRIBE