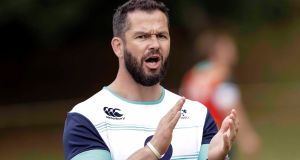 Andy Farrell: “Coming to Ireland and living in Dublin is almost like going home for me. Just the people and family-type atmosphere.”

If this slightly remodelled Ireland squad lacks some of the leadership figures of yore, one of the most exciting things about this forthcoming series is the presence of Andy Farrell. Not just a fresh voice, but in that thick Lancashire accent, a booming one as well, to some degree perhaps emulating that of Paul O’Connell. He has that presence about him too.

The excitement starts with the players and emanates from the Lions tour three summers ago, when 14 Irish players came across Farrell and his training methods. Only Jamie Heaslip and Keith Earls are here now but all – including Brian O’Driscoll – were singularly impressed, and so it has been since Farrell came aboard.

“A straight talker” is the repeated description. Someone who doesn’t complicate things – and he’s a fresh voice within the coaching ticket too. His influence will take time, but word is that there may be some tweaks and fireworks from the Irish defence today. It needed a strong figure to replace the popular Les Kiss. The timing, after his and England’s anti-climactic World Cup, looks perfect both ways.

Chatting at a poolside table at the Ireland squad’s team hotel on Thursday, the amiable Farrell conveys that impression too when you begin by asking him why Ireland?

“The big move for us, and anyone else from Wigan, is to move down south. That’s the big move,” he adds, smiling. “Coming to Ireland and living in Dublin is almost like going home for me. Just the people and family-type atmosphere.”

He recalls his first day working as an adviser with Munster in January. “I went around to Axel’s [Anthony Foley] house and his wife cooked a lovely meal. They were very welcoming and then the whole family started to turn up. That reminded me of home. You don’t get that down south. Everybody is very family-orientated. It’s a big city is Dublin, but it still seems as if everyone knows each other, gets along really well and is very gracious and friendly. It reminds me of home really. I suppose when you’re a northern lad these things are important to you.”

Being a straight talker goes with the territory too. “We are what we are; you don’t need to beat about the bush. I think everyone is trustworthy. You don’t make the bullshit up. You just get on with the reality and that’s the northern way of life really.”

That eight-week spell with Munster was an ideal insight into the provincial set-ups from the academies up, before the preparatory “cushion”, as he calls it, when coming aboard the ticket on April 2nd.

“It’s everything I wished it would be. I think it’s an unbelievably exciting time for myself and the squad. I mean, it doesn’t get any bigger than what’s coming up this year. It’s good for me. Everybody starts on an even keel and there’s no better place to start than here in South Africa, and who can and can’t deal with the pressures that come with that.”

It also transpires that the Irish players’ respect for Farrell on that Lions tour was reciprocal. “I noticed that the Irish lads were setting the tone as far as work ethic on and off the field, and a lot of that was down to the Irish set-up at the time. Joe was in Leinster then, but you could see the influence. The way the guys talked about Joe and the influence he had on them set them apart.

“Off the field, that had a massive influence on the rest of the squad. I loved the way they were hungry for information. It showed they wanted to learn, and that was a big part of why I wanted to come along as well.

“His record speaks for itself. He has to be one of the best coaches in the world, for his record alone. If I’d not gone with this, then that’s me saying to myself ‘well, you don’t want to get better’.”

Farrell hopes to bring constant improvement both to himself and the squad, and put his own stamp on things. But he is mindful of not changing too much too soon, having inherited a strong base from Kiss. “Sometimes if it’s good you don’t have to fix it anyway. You assess things as you go. That’s why it’s great being out here for three Tests, because we’ll be assessed ourselves, won’t we?”

One of the first things that strikes you about Farrell is how a 41-year-old has accumulated such a vast list of achievements in both codes of the game. He had one of the truly stellar rugby league careers.

His parents, Carol and Peter, reared four children in Wigan, and one of Farrell’s twin brothers, Phil, played rugby league once for Ireland back in 2003. “I was as proud of that as I was playing for England, because that’s where it all started for the Farrells.”

Introduced to rugby league at 10, Farrell made his debut for Wigan at 16. As, mostly, a goal-kicking loose forward, Farrell played 370 games for Wigan, scoring over 3,000 points, was the youngest player to win in a Challenge Cup final at 17 years 11 months, won the first of 34 caps for Great Britain at 18, and was part of the Wigan team that beat the Brisbane Broncos down under to win the World Club Challenge that same year.

Captain of Wigan and then Great Britain at 21, he would become only the second British player, after Ellery Hanley in 1989, to win the world player of the year award since its inception in the mid-Eighties. And he was awarded an OBE in the 2005 New Year Honours list.

Some career, and he can look back with “no regrets” on his league career. “I wanted to go and play in Australia, because that’s the best league by a country mile, the NRL, and test myself there. I’d agreed stuff over there but things happened and Wigan twisted my arm to stay. I stayed and I loved every single minute of it. Wigan-born and bred, I joined them at 14, made my debut at 16 and left at 29. And if I’d gone to Australia, I wouldn’t be here now. So I’ve no regrets. I’ve been very fortunate really.”

Instead, he opted for a switch to rugby union and joined Saracens. “I wanted us to get out of our comfort zone. Owen [their son] was kicking and screaming as a 13-year-old at the time but it’s not turned out too bad for him either,” he notes with a chuckle.

And coaching against England and his son, starting with the Six Nations finale next March? “It won’t be awkward whatsoever. Look, he’s a professional, I’m a professional. You do your job, don’t you?”

“Ironically enough, as a kid I never let him beat me at anything, but since he’s turned 19 he’s beaten me at everything so it’s about time I started getting my own back,” he says, with a long chuckle.

His own rugby union debut was delayed for over a year by a sequence of injuries and a car crash, in which he ruptured two discs in his back. “I was on my way to a kids’ Christmas carol concert. I pulled up at traffic lights and somebody hit me from behind. The next day I had an operation and 12 weeks back into my rehab it went again.

“Look, you take the rough with the smooth. For nine years in rugby league I never missed a game, and in the last three years I hardly ever played a game. It’s all swings and roundabouts, isn’t it?”

“That was an unbelievable experience and although, rightly, we got stuffed, it was a pleasure to be a part of. To see how the Irish dealt the pressure that day, they were never going to lose that from the first whistle.

“It was only my second Test match but I loved it. I thought they played a fantastic game but more importantly the respect that everyone had for the occasion sticks out in my mind.”

Farrell should also only be better for his three years coaching with Saracens, and four years as England’s defensive coach.

“I’ve always wanted to be a coach, from the age of 21 I’d say. I wrote stuff down from all the coaches I’ve had in my career. I suppose that’s the type of player I was. I was never an individual player, I was always a team player. I was always a captain. It was always about how teams gelled together and I was fortunate as a player that I loved training, watching videos. I don’t see it as work, I see it as a pleasure really.”

It didn’t end nicely with England, a shame as much as anything else, he says, for the hard work that Stuart Lancaster and all the coaching and playing staff put in over four years.

“But that’s sport, isn’t it? It ended in a crescendo of getting knocked out of our home World Cup. But I wish everyone luck there because there’s a hell of a lot of hard work that the lads put it in, not just the staff, and I’m sure they’ll get some good rewards in the years to come. I suppose for myself, you’re pretty stupid if you don’t learn from these types of experiences.”

And so to today and the next couple of Saturdays to come.

“It’s great, because we’ll see where we’re at. We don’t want to just sit back on our heels and wait for the game to come at us. We want to give a decent account of ourselves and see where that takes us for the second Test.”

He and Ireland are jumping straight into the deep end of the pool. But he knows how to swim.