The death of the man who represented what Munster is about is too sad for words, too shocking to be believed 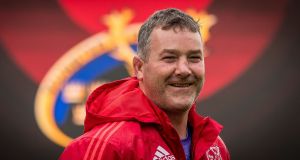 “He was a big man, a solid unit, and as a man he was as solid as a rock too.” Photograph: Morgan Treacy/Inpho

What do you say about Anthony Foley? “That he was loved and he was a legend,” was how two of the hundreds of shocked Munster supporters congregated outside the Stade Yves du Manoir put it. And that will do for starters.

Their sense of grief was very tangible and very real, and not just because Axel was far too young to no longer be with us. He was the very soul of Munster, to the forefront of the golden generation which was honed in Shannon’s all-conquering AIL-winning sides and made the transition from amateurism to professionalism, and eventually led them all the way to their Holy Grail of a first Heineken Cup triumph in Cardiff in 2006. There was no-one more fitting to be the first man to finally lift that trophy which had eluded them for so long.

He was born to play rugby. Some of his earliest childhood memories were of the Thomond Park home dressing room, be it for Shannon or Munster games, at the behest of his father Brendan. Born to play, and born to lead.

The first time I saw him play was in a Munster Schools Senior Cup final in 1992 when he captained St Munchin’s from number eight as valiantly as any boy-man possibly could, even though they lost to PBC Cork. He was like a force of nature.

It wasn’t long before he was breaking into the Shannon four-in-a-row side from 1995 to 1998, and in turn the Munster team. He became a bedrock of both sides. They were a generation of players who knew how to win, and no-one was more instrumental than Foley.

He wasn’t the quickest backrower of all time, that’s for sure, but his brain was way quicker than most. Professionalism was good for him and his Munster peers, and he and they were good for professionalism and particularly the Heineken Cup.

His stats may not always have been off the chart, but he had an uncanny knack for being in the right place at the right time. He influenced games, by getting on the ball and invariably making the right decision and executing it flawlessly.

“Axel was a genius,” said Mick Galwey on Sunday. “He always did the right thing, or called the right move or appeared at the right place, and he really was a very good captain.” 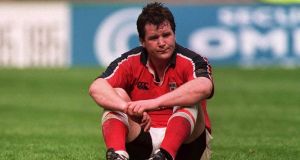 Very often you didn’t fully appreciate his contribution until you went back and watched it a second time. Suddenly he seemed to be everywhere, involved all the time, and always doing smart things. He probably wasn’t fully appreciated as a player.

His on-field intelligence and reading of the game manifested itself in his eye for the try-line. He scored 39 tries for Munster in over 200 appearances, which is a faintly ridiculous tally for a backrower, and was a record for the province until recently overtaken by Simon Zebo. Indeed, his tally of 22 in the European Champions Cup is still the best by any Munster player.

He scored on his Irish debut as well, against England at Lansdowne Road in 1995, in the first of his five Test tries in 62 caps. He would win only nine caps by 1997, and was then out of the squad for three years until being recalled by Warren Gatland against England at Twickenham in 2000. For the next six seasons, he was one of the first names on the teamsheet.

He was durable, he was tough, and he was hard as a rock in defence. As Galwey said yesterday, “you wanted someone running at Axel because you knew they wouldn’t be getting anywhere, and he was also a great man to take the ball on; get over the gain line; do the dirty work.”

One recalls the day in February 2001 when France came to Lansdowne Road looking for revenge following Brian O’Driscoll’s hat-trick heroics the year before in Paris. They picked a huge side, designed to beat Ireland up, particularly up front. A few minutes into the game, the French captain Fabien Pelous came around the corner, ran into Foley and was stopped in his tracks. Foley had drawn a line in the sand. Ireland won 22-15.

He was a big man, a solid unit, and as a man he was as solid as a rock too. “As a friend you couldn’t get better,” said a distraught Galwey. “He was just a solid fella and solid friend that you could turn to at any time.”

Foley also had an uncanny way of simplifying the game in thought as well as deed. He didn’t waste words and invariably spoke sense. Some observers complained about his image in front of the camera or in a microphone, that he was in some way gruff, but this reporter always found him unstintingly candid, honest and to the point, especially so when elevated to the role of Munster head coach.

“It’s important at times that you have a bit of separation; unfortunately I can’t really separate myself from this job,” he admitted to me mid-way through last season when Munster had just averted a sixth successive defeat by beating Ulster.

“I can’t separate myself from Munster at times because it’s been 21 years nearly now, in and around the squad, since ’94. So it’s a good chunk of my life and I want us to win, and I want us to do well and I want us to be competing at the back end of every competition. I want us to have as many players playing international rugby as possible, through all the levels.

“That’s the drive, that’s the desire and sometimes you take it very personally, and when it’s under your watch, it’s even more frustrating.”

He had a tough two years at the helm, but as then, never shirked a press conference or an interview request or a question. He always answered a phone call or if not, never failed to return one. The Man United obsession was a bit over the top, but what the heck! And he was a damned good five-a-side player too. All round, he was a good lad, and had so much more to give.

Foley was at Galwey’s 50th birthday party last weekend in Kilkenny and was in great form. Old team-mates even chided him about how well he was looking. He had seemed relaxed and content to be working in tandem with Rassie Erasmus, perhaps even partially enjoying that the heat was off him to some extent, not that he’d have cared any less about Munster’s results.

With his 43rd birthday due at the end of the month, it’s just too sad for words, too shocking to be believed. A legend alright, and much loved. Our deepest sympathies to his wife Olive, his children Dan and Tony, parents Brendan and Sheila, sisters and Orla and Rosie, and all his extended Munster and Irish family of supporters.