Foley likely to be named Munster coach within the month

Candidature embellished by experience accrued with Munster and Wolfhounds 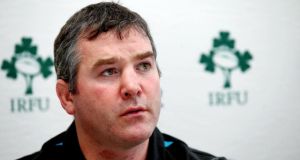 Anthony Foley, the stand-out candidate to succeed Rob Penney at the season’s end, will likely be confirmed as new Munster head coach within the next month.

This was the time frame outlined by the province’s chief executive Garrett Fitzgerald yesterday to choose a successor.

Foley’s candidature has been enhanced by the additional experience accrued with Munster and the Wolfhounds. And which Fitzgerald acknowledged, since being one of the three candidates shortlisted for the job along with Tana Umaga when Penney was anointed under two years ago.

Furthermore, appointing a popular indigenous coach like Foley would be the most credible choice after declining to look beyond a third season for Penney and thereby break up a coaching ticket that has guided Munster to 15 wins out of 18, a home Heineken Cup quarter-final and top of the Rabo Pro 12.

Speaking at the squad’s University of Limerick base, Fitzgerald said the province were not for budging on offering more than the one-year extension which was part of the initial two-year deal, despite “a counter offer” to Penney believed to be a three-year deal coaching in Japan.

“Did we consider offering and going back in? No, we didn’t at that stage,” admitted Fitzgerald. Asked whether Penney was happy, Fitzgerald replied: “Well, I can’t in any way say if a person is in any way happy with the outcome. His initial plan was that he would have liked to have stayed.”

Referencing the counter offer and the inner turmoil of family considerations (Penney has two teenage sons in CBC), Fitzgerald added: “I’m sure he is not going around celebrating about it or anything else like that. But he is a very practical, positive man, who knows that you have to plan long term as well.”

In a subsequent press conference, Penney would not discuss the matter. Asked why, he replied: “It’s my business. Thanks.” Even when subsequently asked about Foley’s credentials as a head coach he answered: “I don’t want to make any comments around that stuff.” With Foley’s succession likely to be confirmed within a month, it could add to any friction that might already exist among the coaching ticket for the seasonal run-in.

The recruitment process will be conducted by the Munster Professional Games Committee and an IRFU representative, most probably the same figures as when Penney was appointed, namely the PGC chairman John Kelly, another former player Andrew Thompson, John Hartery, current Munster branch president and a director of finances at the BDO accountancy firm, and Fitzgerald himself, who said Munster were under no pressure to appoint an indigenous coach, save from the media, but rather to appoint the right person.

Although Munster remain an attractive option for leading coaches, and several applications from home and abroad have landed on his desk, he said: “The amount of quality coaches that are available at any one time is minimal.” A degree of continuity was “a bonus” if not essential. But to this end Ian Costello may also be in line for a promotion from skills coach to backs coach, having previously worked with many of the current squad in the Munster academy and A side.

Penney and his departing assistant Simon Mannix are based in Cork, and the next step in relocating en bloc to the UL is to obtain planning permission “within the next three weeks” for the proposed new training centre.


Ticket income
Ultimately the new ticket is unlikely to feature Declan Kidney, Eddie O’Sullivan or Ronan O’Gara. The latter is only in his first season of his new career with Racing Metro, while a new deal has been agreed with Niall O’Donovan to extend his stay as Munster manager; a further pointer towards Foley, his long-time friend and fellow Shannon man, becoming the new head coach.

Last year’s reported loss of €1 million has not been helped by a shortfall of €600,000 in ticket income this season, “but other aspects of our income have improved” said Fitzgerald, “and as a consequence of a [Heineken Cup] quarter-final and what we hope will be a knock-out in the Rabo we’ll be in a better position than what we budgeted for.”

The cause? “Purely lack of income. People don’t have money to spend. Once you move outside of the greater Dublin area at the moment we’re operating in two different economies.”

They would not be reducing ticket prices, while budgets were already in place regarding coaching appointments.

There is also uncertainty over the future of European rugby and the Pro 12, and indeed over Fitzgerald continuing in his role, but he expressed confidence that the Heineken Cup would be in place next season.

“The only question is probably the number of countries that will be in it.”