Felix Jones still a loyal servant of Munster’s cause 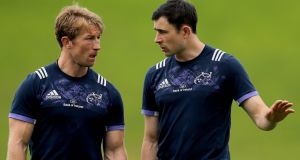 Felix Jones has never lacked courage in his career so it’s not surprising the 15-times capped Ireland fullback, who celebrates his 29th birthday today, opted to embrace a potentially difficult assignment.

Jones forfeited his career to a second neck injury, sustained last October, the disappointment and frustration was still fresh when he was approached to join a coaching axis under Munster’s new director of rugby, John ‘Rassie’ Erasmus.

The role of attack/skills coach was dangled in front of him. He spoke to family, friends, former team-mates and people whose opinions he respected.

“I wouldn’t say it was an easy decision. It was something that I really had to consider for a while. Even after I immediately retired it was very difficult still. On one occasion Johne Murphy called down to Limerick and we said we’d all meet up,” he said.

“A lot of the guys on the team were there with whom I’m obviously still very friendly; the craic was 90 and everyone was having a good time but I found it pretty tough because I had to park that [involvement].”

Jones had never shied away from tough choices. A Grand Slam winner with Ireland Under-20s (2007), the boy from Sandycove played underage rugby with Leinster and then made his senior debut in 2008. The easier thing would have been to hang around, bide his time, but he wanted to be a professional rugby player.

Leinster offered him a logjam in personnel, Munster opportunities. He swapped provinces in 2009, endured a career blighted by serious injuries. For six years he diligently rehabilitated each time; it would have broken lesser characters.

He won 90 caps in the red jersey, captained his adopted province, and had Paul O’Connell describe him as “one of Munster’s greatest ever players”. His backstory is germane to the person that he is today.

He asserts that Jones the coach is not that much different to Jones the player. “I am not saying things now that I wouldn’t have as a player. Anything I do is dedicated solely to improving that player as an individual within the team environment.

“Some of the young guys coming through would have had no reference point to playing with me. In a couple of years time, if I am still here, the guys will only know me as Felix the coach.

“I am being asked to look after a lot of our attacking fundamentals. I get to work closely with our back three, also with the backs in terms of improving skill sets and also in analysis work.”

As a player he would have watched purely from the blinkered perspective of his role within the team. As a coach he has a more wide-ranging remit. He smiles when he points out that a major difference between playing and coaching is that he gets less sleep these days.

Education is important and not just studying for a Masters in Sports Psychology at the University if Limerick, but also a desire to inform himself about the current trends and innovations in back play. New Zealand rugby is an obvious reference point with a former Munster player and coach happy to chat.

He explained: “I speak with several people down there, including Jason Holland. He’s a pretty big game this weekend [with the Hurricanes in the Super 15 final]. I would love an opportunity to go down there.

“The IRFU are very supportive of their coaches getting exposed to new environments and coming back with new ideas. New Zealand rugby is at the pinnacle of world rugby and to get a chance to learn from some of the best teams in the world would be great.”

He considers for a moment when asked how he would categorise his feelings as the season looms. They are those of what might be described as an optimistic realist. Any shortcomings won’t be from a lack of effort on his part.