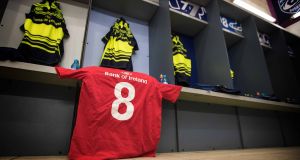 The Leinster changing room before the match against Montpellier yesterday with the Munster number eight jersey in tribute to the late Munster head coach Anthony Foley. Photograph: Billy Stickland/Inpho

The global rugby family came together for Anthony Foley’s hauntingly moving funeral last Friday and the European game continued to honour the iconic Munster and Irish “8” in fitting and touching manner at every Champions and Challenge Cup games, none more so, of course, than at Thomond Park. On this Monday morning, rugby can hold its head high.

Sport, and the result of a game, has never felt so irrelevant as it did at Thomond Park and every other ground over the weekend, and yet never has a sporting occasion, performance and outcome felt so relevant.

While every game in both competitions was preceded by a minute’s silence or applause, other paid tribute to Foley in their own ways. The Leinster players wore red T-shirts with Foley’s initials on the front and the number “8” on the back for their warm-up and there was a minute’s silence prior to their 22-14 defeat to Montpellier yesterday.

After feeling the full force of Nemani Nadolo, all 21½-stone of him, an error-prone Leinster not only denied Montpellier a bonus point, but earned one themselves with Isa Nacewa’s last-minute try and conversion. This has placed Leinster atop pool four, where each team has one win.

Nacewa had curiously assumed the kicking duties from Johnny Sexton in the first half, before Sexton and Seán O’Brien departed, yet Leo Cullen maintained neither was injured, rather that Leinster were being “ultra-cautious” and that “both of them are doing fine”. That said, he also admitted “they were pissed off” to be removed at half-time.

The Connacht players and management yesterday wore red armbands during their eight-try, 52-7 win away to Zebre, which put them atop pool two after Wasps salvaged a last-minute draw away to Toulouse, while the Connacht supporters also stood up in the eighth minute and applauded for a minute.

The Clermont fans wore red for their home win over Bordeaux/Begles on Saturday as Les Jaunards became l’armée rouge for the day, while Glasgow and the Scarlets both wore special, commemorative jerseys in honour of Foley.

Glasgow also laid a wreath outside Thomond Park on Friday and while acutely disappointed with his team’s showing, head coach Gregor Townsend expressed his “pride in what rugby can do and pride in a team like Munster. For a number of years Munster was everybody’s second favourite team and they showed today what they are capable of on the field but also off the field”.

“We talked a lot about what might happen and Munster have been excellent with their communication on what’s happening during the day. We felt we played a part in a really special occasion. I thought it was a tremendous, inspiring occasion.”

CJ Stander wore the number 24 jersey as his customary number eight jersey was rested for the day. “Everyone was grieving, and to see all the support the family got, that we got, it was massive. Especially at the funeral, to see the amount of people that were there, that’s the thing, with the Irish culture, when one goes, everyone is behind him,” said a tearful Stander.

As well as reflecting on the day’s memorable events, a common theme afterwards was whether Foley’s spirit will have revived Munster’s spirit not only for one day, but thereafter as well.

It took Foley’s passing to remind us what a truly special place Thomond Park can be. With Leicester and Racing to come in December and January, there’s every chance this will be the case. Munster need this to continue, and if it does, it would be an enduring tribute to Foley, and his ultimate legacy.

“Things change so quickly, like we saw last week, so we can’t get over-confident or anything,” said Rassie Erasmus. “Today was a weird, special, unique situation. Now, in the next few months, things will normalise again and then we’ll have to analyse that as well.”

Asked how Munster had kept going for the last hour with 14 men following the dismissal of Keith Earls, Erasmus said: “Listen, they did it for Axel. It’s as simple as that. If you’ve got something like that in your heart, when you’re really tired that doesn’t go away. It stays there . . .

“But it was tough to get guys off the park. It was tough to keep guys from wanting to go onto the park and make a difference there, which again is just a tribute to Axel and the respect the players had for Axel.”

Like the weekend, all conducted themselves with pure class and while inspired by profoundly tragic and sad circumstances, it was oddly uplifting.

Fully 20 minutes after the full-time whistle, and after the squad had lapped the pitch, no one had left the capacity Thomond Park. No one wanted to leave.

No one present would ever forget this sad, wonderful day.