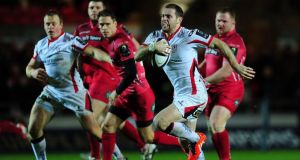 James Davies scored a late try as Scarlets beat Ulster 22-13 at Parc y Scarlets to keep their chances alive of reaching the knockout stages of the Champions Cup.

With Rhys Priestland kicking 17 points Scarlets have gone second in Pool Three with games against Toulon and Leicester remaining in January.

Ulster could only manage a losing bonus point despite a Darren Cave try, two penalties from Ruan Pienaar and a conversion from Ian Humphreys.

Scarlets were forced into a late change when Wales lock Jake Ball pulled out with a virus, with George Earle coming into the second row.

For Ulster, centre Luke Marshall returned after recovering from a knee injury sustained playing for the Ulster Ravens in October.

It was Scarlets who made the early inroads on the scoreboard, opening up a 6-0 lead in the opening quarter through two Priestland penalties, the first after Franco van der Merwe was penalised at a line-out and another when Ulster hands slowed ball at a ruck.

Another useful attack from the home side forced Van der Merwe offside as Priestland made it three out of three.

And it was 12-0 after 33 minutes as Priestland found the target again after Rory Best handled the ball at a ruck.

Priestland sent a 40-metre attempt wide and was short with another shot but an 11-3 penalty advantage at the break had already taken its toll.

But it took Ulster only 90 seconds after the restart to break their duck, with Luke Marshall and Darren Cave combining effectively twice for Cave to go in under the posts and Humphreys converting. Scarlets had put themselves under pressure when Rhodri Williams’ box kick had gone straight into touch from just outside the 22.

Priestland was wayward with another penalty after Ulster continued to struggle at the scrum. Ulster also had a chance to cut the deficit further but Humphreys was wide of the target with his first penalty shot on 55 minutes.

But Scarlets got on the scoreboard next with a Priestland penalty which went over via the help of the right upright to take the home side into a 15-7 lead on 61 minutes.

But despite being down to 14 men Tommy Bowe broke through the Scarlets defence before Cave could not hold on to what would have been a try-scoring pass.

But Pienaar kicked two penalties, one from close to halfway, in the space of three minutes to cut the deficit to only two points.

However, on 76 minutes Pienaar missed a third penalty which would have given Ulster the lead.

And the contest but was put to bed two minutes from time when flanker Davies intercepted the ball from an Ulster scrum to go over under the posts. Priestland added a drop-goal conversion.

Amber Barrett hoping hard work will pay off with Ireland 06:44
West Ham ‘really disappointed’ after win over Leeds, says Moyes 06:28
Jamison Gibson-Park embracing life as the main man 06:53
Games remain on hold as the GAA wait for word from the Government 06:49
Jack Byrne embracing ‘technical football’ in Cypriot sunshine 07:16
Crossword Get access to over 6,000 interactive crosswords