Toulon march on after Munster’s brave effort comes up short 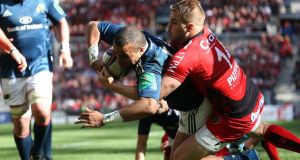 Toulon 24 Munster 16: Toulon moved to within one match of defending their Heineken Cup title they won in Dublin last year when they overcame a gallant Munster challenge in the semi-final at the Stade Velodrome in Marseille.

The French side will now play Aviva Premiership leaders Saracens in the European final at the Millennium Stadium on Saturday, May 24th (5.0). Munster will reflect on what might have been, principally basic errors that pockmarked their performance and also the concession of some soft penalties that gave Toulon momentum on the scoreboard, particularly in the first half.

Toulon outhalf and captain Jonny Wilkinson, set to retire at the end of the season to take up a place in the backroom team at the club as a kicking coach, posted six penalties and a drop goal, while fullback Delon Armitage landed a monster penalty from inside his own half.

Munster had the satisfaction of scoring the only try of the game through the excellent Simon Zebo, who showed great strength to force his way over the line, through a barrage of would be tacklers and also ground the ball. Steffon Armitage couldn’t stop Zebo but when the roles were reversed earlier in the game, the Munster wing showed great tenacity to prevent the Toulon number eight from scoring a certain try.

Munster did turn around their initial difficulty in the scrum, particularly after the interval and Dave Kilcoyne deserves great credit for his perseverance after being initially singled out by referee Wayne Barnes, who penalised the loosehead three times and threatened him with a yellow card. Kilcoyne would have his revenge later in the match when forcing Carl Hayman to concede a couple.

The Irish province were forced to scramble in defence as Toulon threatened on three or four occasions, with James Downey twice producing massive tackles. The French side led 18-9 at the interval, Munster’s response coming from the boot of Ian Keatley; the outhalf had a brilliant game. Zebo’s try and Keatley’s magnificent touchline conversion saw them claw their way back to 18-16 down but Wilkinson’s boot would twice more nudge Toulon further ahead.

Munster produced a more cohesive and precise performance after the interval, making fewer errors and protecting the ball better but their ambition was still periodically undermined by sloppy handling and on a couple of occasions, poor game management.

There can be no doubting the character or commitment that the Irish side displayed, superbly led by Damien Varley, and with some outstanding contributions from James Coughlan, Paul O’Connell, Conor Murray, Keatley and Zebo in particular: everyone contributed though.

O’Connell had taken over the captaincy when eight minutes from time, Munster won a penalty in the Toulon 22, and he directed Keatley – the score was 21-15 at the time – to kick to the corner. Munster had used the gambit earlier and it had yielded seven points; Zebo’s try and Keatley’s conversion. This time the gamble failed when several phases later the ball was spilled in contact, 15 metres from the Toulon line.

The defending champions wobbled at times but they showed resilience in the way they defended their line and it was that aggression and discipline that allowed them to progress to the final. There were definitely rattled at times but the experience of the expensively assembled squad in playing in Super 15 and World Cup finals stood to them.

Munster were gallant in defeat but that won’t offer much consolation as they lost their fourth semi-final. Rob Penney’s side will now try and refocus on the RaboDirect Pro12 League and try and take out some of the hurt and disappointment they’ll feel from this afternoon’s match.