Munster hobble out of Champions Cup at the hands of Saracens 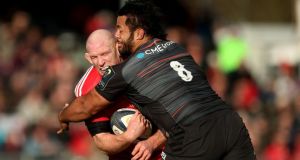 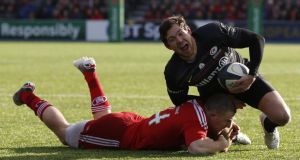 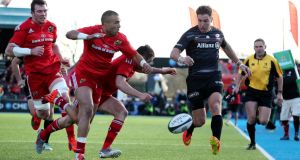 Munster’s Simon Zebo and Felix Jones are too late to prevent Chris Wyles of Saracens getting his kick through to Chris Ashton for the second try at Allianz Park. Photograph: Dan Sheridan/ Inpho

It was hard to describe this as the day the light went out because in truth Munster barely flickered. Saracens dominated for long stretches, making regular inroads with their maul and scrum as they gave the Munster pack a bit of a beating and ran in three tries through their wingers.

In truth, Saracens ought to have won a bonus point. Munster prevented them doing that, and kept trying, but this was a relatively limp and desperately inaccurate way to exit the European Champions Cup for only the second time in 16 years.

To have reached the last two semi-finals was a mighty achievement, for this is not a vintage generation, and losing Conor Murray was a blow too many for an injury-hit squad, which was compounded by the 28th minute loss of their best ball-carrier CJ Stander. Ultimately though, they neither had the power up front nor the skills set to compete equally with a rampant home side. It was Munster’s biggest defeat since 1997, and it should have been bigger than it was.

The scrum particularly was a shambles - England will assuredly target this area in the Six Nations given the provinces troubles against Premiership sides - which not even Murray could have salvaged, while multiple knock-ons at times contributed to this looking like a glorified training run for Sarries.

A blizzard of snow had greeted a planeload of mostly Munster fans at Luton airport but come kick-off the skies had turned blue. In time-honoured fashion the Red Army numbered well more than their official allocation of 1,000 - most being congregated in the West Stand and behind the two in-goal areas. Although according to the programme notes of long-standing Saracens’ chairman Nigel Wray, the visiting fans wear ‘orange’.

Most Munster eyes were then immediately on Duncan Williams. The 28-year-old replacement had a huge task in deputising for Murray, and while this was his 82nd appearance for Munster and his 10th in Europe, he was making his first start in the European Champions Cup or its Heineken Cup predecessor.

Initially he settled into a good groove, ensuring good hang time with a couple of box kicks inside the five metre tramline along Munster’s left flank to give Simon Zebo time to chase down Chris Ashton and enable Munster to exit their own 22. But then he had a third charged down by Jim Hamilton, and Alistair Hargreaves was stopped short of the line.

Munster withheld the ensuing pressure, Andrew Conway stopping Alex Goode with a strong low tackle out wide before Denis Hurley won a penalty against Marcelo Bosch for not releasing.

Alas, when Williams sought to run back a kick in behind and was tackled, losing the ball in the process, it led to a Munster player (there were a few candidates) being pinged for going off their feet in the ensuing Saracens pressure, and Owen Farrell opened the scoring.

Not helped by Stander’s poor pass off the scrum, Williams was then penalised for holding on, but having had some joy when working the ball wide to Conway on the right, they gained even more yardage when running from deeper through Felix Jones on the left. But Munster couldn’t build any momentum and Keatley’s well-struck long diagonal from his own 10-metre line rolled dead.

Their scrum was also in increasing difficulty, and when Billy Vunipola charged off the base of a twisting scrum, Saracens struck two phases later with something of a trademark score - Farrell using the ‘screen’ of decoy runners to bring Chris Ashton into the line off his wing. Vunipola’s run pulled Conway in, giving Goode a routine two-on-one for Chris Wyles, a late replacement for David Strettle, to score.

Ashton was fortunate not to be yellow carded when putting his shoulder into an airborne Zebo - it wasn’t a whole lot different from the incident that led to Jared Payne being red-carded in last season’s quarter-final at Ravenhill against Saracens.

Another creaking scrum saw Zebo knock-on from Stander’s offload, and things worsened with the loss of Stander, who hobbled off in the 28th minute and with their other like-minded ball-carrying number eight Robin Copeland injured, this meant flanker Dave O’Callaghan coming on with Peter O’Mahony slipping to eight. Another Saracens maul followed from which Paul O’Connell was penalised, not for the first time in his career, by Romain Poite for side entry at a maul and Farrell made it 13-0.

Saracens had been pushing before the put-in, repeatedly, and when Poite elevated an indirect penalty to a full penalty for a second such offence, Keatley opened Munster’s account with a well-struck penalty.

But it was a mere temporary reprieve. When O’Connell trucked the ball up and Jones was penalised for flying in off his feet, Richard Wigglesworth caught the visiting side unawares with a quick tap on half-way, Bosch finding Wyles in space. The wing cleverly weighted a grubber inside before being corralled for Ashton to easily win the touchdown.

Munster looked bedraggled already. Billy Vunipola beat four players from the restart and Keatley kicked out on the full for another lineout maul to be pulled down - Dave Foley was penalised - and Farrell closed out the half to make it 23-3 at the break.

Zebo sprung Munster and Red Army alike into life upon the resumption with a barnstorming run through three tackles before they went through multiple phases - Foley making a couple of strong carries - before Kelly brown tackled Pat Howard and Mako Vunipola poached for the turnover penalty as O’Connell missed the clearout. Not that there had been much doubt about the outcome by now, but that was assuredly it, and thereafter Munster were almost continually on the back foot.

O’Connell, not enjoying his most distinguished game in the red jersey, then passed poorly from the base of a ruck for another turnover. In the resulting Saracens pressure, a defensive lineout slipped from the hands of the normally reliable Casey and Munster were fortunate Billy Vunipola lost control at the base of an ominous five-metre scrum before O’Mahony won a relieving penalty after Jones was pinged for going off his feet again.

An illegal, if brilliant, poach by Jacques Burger, who never released after the tackle off Zebo kept Saracens in the ascendancy. Eusebio Guinazu did improve the scrum when introduced, though surprisingly JJ Hanrhan was not introduced until the 75th minute, and in any case Williams was pinged for a second time for making an illegal steal. Curiously Saracens continued to go for the posts and saw Farrell for once miss them, but a similar offence, in the eyes of Poite, led to James Cronin being binned.

Even so, Zebo manufactured a break out with his footwork and offload to Duncan Williams, and after he was late tackled by Billy Vunipola, O’Mahony broke infield off the ensuing lineout - admittedly after an anxious recourse to the TMO for an off the ball head-to-head between O’Mahony and Burger which sparked a the game’s belated first skirmish.

The captain offloaded to Hurley and two phases later the centre crashed over beside the posts. But as Munster worked the ball through the phases, Saracens countered off a turnover and worked a try for Ashton as Poite lay injured and was replaced as referee by Christophe Berdos for the endgame.

Ernst Joubert for Brown (all 68 mins), Brett Sharman for George, Maro Itoje for Hamilton, Ben Ransom for Bosch (both 74 mins).