Munster can see off old foes Toulouse at Thomond Park 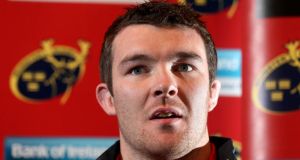 Munster and Toulouse share a lavish history in the Heineken Cup; four homilies to some of the best rugby the tournament can produce, defined by colour, excitement, near misses and memorable moments. It’s hardly a surprise that there’s a huge clamour for another chapter.

Thomond Park has long since been sold out for this fifth instalment, the head-to-head contests, beautifully poised at two apiece. Perhaps the only surprise is that the four-time European champions have never previous visited Limerick.

During the week France international and Toulouse fullback Maxime Medard stated that while conversant with the reputation of the Munster faithful for the manner in which they provide the emotional fuel that drives the playing machine, Toulouse have recently negotiated trips to Stade de France (Stade Francais) and the Veledrome in Marseilles (Toulon) without succumbing to stage fright.

That’s fine and dandy but taking an overview of Toulouse’s season to date reveals a team that has both struggled on the road and struggled to find a consistent rhythm in terms of performance. Injuries have been a factor, particularly one to outhalf former All Black Luke McAlister, who missed a chunk of the season.

He’s named among the replacements, it’s not a cast iron certainly that he’ll tog out. Flanker Yannick Nyanga faces a similar scenario. Toulouse coach Guy Noves will make a decision this morning.

There is no doubt that Toulouse are a better side with McAlister at outhalf but they must initially trust the game management to the mercurial Lionel Beauxis. South African Jano Vermaak has been preferred to Jean-Marc Doussain at scrumhalf.

Behemoth
Noves has made 10 changes from the side that ran Toulon to five points in Marseilles. Medard, Gael Fickou and Yoann Maestri return, while Louis Picamoles has shrugged off an injury.

Picamoles beat more defenders (27) than any other player in the pool stages while also racking up the most carries (84). Joe Tekori, another ball carrying behemoth, moves from the secondrow to backrow. The French side though will miss Samoan tighthead prop Census Johnston.

O’Mahony’s return, from a leadership perspective and value he provides at the breakdown, over the ball and in support play, is an important addition. Penney has done an excellent job in broadening the province’s attacking values and this is exactly the match where Munster’s more fluent, expansive style can reap dividends.

The home side will want to move the Toulouse eight around the pitch, preferably at a decent clip. Munster need to play this game at a high tempo, picking and choosing the collision points on their terms and not becoming embroiled in a tussle for metres around the breakdown. They’ll still need to be precise because Toulouse have the strike power to maximise turnovers.

They’ll also have to kick judiciously otherwise Hosea Gear and the in-form Yoann Huget could make them pay dearly. The same tenets apply in winning any match. It starts up front and Munster know that the scrum and lineout, where Paul O’Connell will be key and the breakdown are key.

Toulouse went to London and beat Saracens at the pool stage but provided Munster absorb the lessons from the Leinster match and tweak their patterns accordingly, they should have a little bit too much for the visitors.