Bath coach laments his side’s inability to cope with a vibrant, free-running Leinster 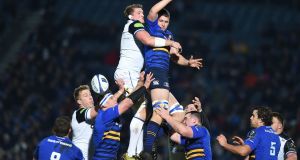 Anonymity being the best form of surprise, that’s gone now.

“I don’t know the youngsters too well, to be honest,” said Mike Ford after his troubled Bath team were being dumped out of Europe.

Ford and everyone else have been forewarned. Garry Ringrose made his presence felt with almost every action but Stuart Barnes was compelled to name Ross Molony – the Leinster academy lock – as Sky Sports man of the match.

From several lineout steals to double figure carries and that 76th minute turnover leading to Ian Madigan making it 25-11, there were plenty of reasons to agree.

Molony and Madigan planned and orchestrated this victory, one from the kicking tee while the 21-year-old lock called each lineout.

“I’ve been running the lineout for a few years now,” Molony said matter-of-factly. “I’m quite comfortable in that position.”

He and Ringrose have a shared history on this RDS pitch. Molony captained St Michael’s to the 2013 Leinster schools final when a stunning Ringrose try helped Blackrock to victory.

They were also members of the 2014 Ireland under-20s side that reached the World Cup semi-final in New Zealand.

“You put them out here in front of a home crowd on TV and they give you a shot, they give you that enthusiasm,” Ford glumly observed. “No matter how good you are tactically, if you don’t have that edge you are going to struggle.”

Leinster seemed almost Argentinian such was their youthful vigour. They certainly attacked in a similar mobile and flexible manner to recent Los Pumas displays.

“The backs, you got to play off front foot,” Ford continued. “Last year we were the most dominant scrum in the Premiership. You know what we did to Leinster at The Rec, for example. It’s not gone our way this year. We’ve got to be smart with the way refs are reffing the scrum.

“We got a fantastic backline, an international backline, but if you don’t give them ball that at least gives them parity, you are going to struggle. Our setpiece wasn’t great now, was it? Lineout . . .” Molony gets enormous credit here.

“We didn’t win many collisions. Our discipline was poor and Madigan picked us off. Credit to Leinster, the enthusiasm the kids showed and the way they ran the football and got off the line was a credit to Leo Cullen. The way they played, they didn’t want to lose here in all three Champions Cup games.

“We pretty much knew they were going to come at us but couldn’t handle it. That’s disappointing really, that we couldn’t win the collision.”

There might be mitigating circumstances but Bath were not allowed do it here by “kids” who have graduated to manhood in the eyes of Leinster folk.