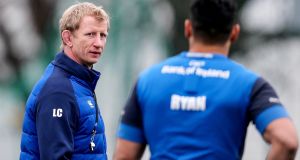 Leo Cullen: “We will prepare for the game as best we can, to put in a good performance, exactly the same mindset as we had last week.” Photograph: Leo Cullen/Inpho

Leo Cullen has no wish to discard the momentum that Leinster have generated in winning their last four matches in all competitions as he contemplates the composition of the team for Saturday’s final Champions Cup pool match against Wasps at the Ricoh Arena (3.15).

However the national player management programme and the legacy of last weekend’s at times, bruising victory over Bath guarantee alterations. Cullen said: “We will make a couple of changes just to freshen things up.” Whether that’s a euphemism or numerically correct will be revealed at lunchtime today.

Cian Healy and Make Ross are “making good progress” and “not a million miles away” but neither will be available for the trip to Coventry. That may also be the case for Garry Ringrose, who excelled against Bath, but who was given a couple of days off at the start of the week.

Cullen explained: “He took a couple of heavy bangs at the weekend and it’s important that we manage him in the correct manner,” before being asked about the 20-year-old centre’s omission from Joe Schmidt’s Ireland squad.

“Garry has gone pretty well but it is very early days for him. I’m sure he will get some opportunities in the future.”

But another of Leinster’s tyros, Josh van der Flier did make the national squad.

“We’re delighted for him that he’s been named and he fully deserves to get that recognition for the work that he does and the performances he’s put in for us over the last number of months.”

The Leinster coach expressed quiet satisfaction with the manner in which the young players contributed to the victory over Bath.

“We’ve a huge amount of faith in those guys. You always worry because you want them to have a positive experience. Thankfully they got pretty decent experience and it was pretty positive as well for most of the game.

“There’s still some learning that they’ll take away from it. In theory it was a dead-rubber game for us but we got a huge amount out of it. There were plenty of positives. It’s important that we build on this with an emphasis on putting a big performance in against Wasps again.”

Leinster face a Wasps team chasing victory, pool honours and a route, front or backdoor, to the knockout stage of the tournament while the Irish province must make do with less tangible rewards; pride being a primary consideration and the memory of a right thumping on the scoreboard from Saturday’s opponents at the RDS.

The Leinster coach admitted: “We were very disappointed the way we went against Wasps in the first round, which led us to a situation where we were scrambling to progress in the pool. We played there this time last year, in the final pool game, which was a 20-20 draw, a very tight game.

“Wasps have made some good signings since then and some pretty significant progress as a team. They have been slowly building over the last couple of years and have a lot of threats across the board.

“We will prepare for the game as best we can, to put in a good performance, exactly the same mindset as we had last week.”

In performance terms, the strands have started to come together nicely in recent matches, but if there is one obvious area that Leinster would like to improve, it is to capitalise on the opportunities created. Scoring just three tries, albeit in a high quality pool, greater precision in execution is an obvious priority.

Cullen accepted the point, adding: “I’d be a bit more worried if we weren’t creating the opportunities but we definitely are creating chances; it’s just having that bit of a clinical edge. We were up against three very good teams.

“There are probably less tries in our pool than there are in the other pools as well, which has to be taken into consideration, just the quality of teams that are there.”

1 Gerry Thornley: Changes to tackle laws could transform rugby by time of next World Cup
2 Sky Sports customers set to save on bills until Premier League returns
3 Jack Grealish needs to show that his remorse is real this time
4 ‘This is sick’ - seventh-tier Swedish club cancels friendly after betting mayhem
5 My favourite sporting moment: Phil Mickelson’s miracle shot at the 2010 Masters
Real news has value SUBSCRIBE