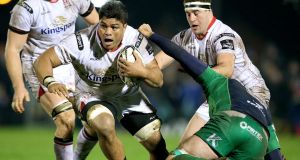 Maybe it’s the relative lack of Irish interest, but the final weekend of what is now the European Champions Cup somehow used to seem more fun.

Mathematically, in addition to Saracens, Leicester and Racing, another 11 teams go into the final round of pool games with hopes of qualification but realistically this can be narrowed down to seven, with Ulster the outsiders and the last realistic hope of Irish representation in the knockout stages.

Come kick-off in Treviso tomorrow, Munster’s fate may well already be sealed but even then they would need a bonus point win and a host of unlikely results to go their way, such as Clermont subsequently losing at home to Bordeaux.

For their part, Ulster appear to have missed a trick in not obtaining a bonus point away to Oyonnax in their re-arranged match two weeks ago, never mind drawing a blank in their two defeats to runaway pool winners Saracens.

A bonus point at home to Oyonnax at lunchtime today is the least of Ulster’s requirements, and the least they should achieve. But even then they have the disadvantage of Pool 1 completing their matches before the other groups, thereby setting them up as the target for the other quarter-final contenders on 18 points.

They could do with boosting their try tally as well, but even then it looks as if they need two of four results to go their way: Leinster winning away to Wasps, the Scarlets beating Northampton at home, Leicester winning away to Stade Francais and/or Exeter beating the Ospreys at home.

In all four instances Wasps, Northampton, Stade and the Ospreys appear to have more to play for. Wasps still have hopes of overtaking Toulon, whereas Leinster are out. Ditto Northampton are better placed on 14 points than Ulster, whereas the Scarlets are out. Stade are also on 14 points (and have scored seven tries more than Ulster), whereas Leicester have already secured a home quarter-final.

The Ospreys know that a win will secure qualification for the first time since 2010 as pool winners, whereas a defeat would put them out, and Exeter, on 11 points, have faint hopes of advancing.

Nonetheless, Ulster will be encouraged to see that Leo Cullen has recalled the likes of Jamie Heaslip, Eoin Reddan and Johnny Sexton (who captains the side for the first time in his 100th game for the province), while keeping the young guns on the bench. Interestingly, with the Six Nations in mind, Rhys Ruddock is named in the second row.

Les Kiss welcomes back Darren Cave, who has recovered from a shoulder injury and will feature for the first time since the start of December, with Stuart McCloskey getting a well-earned rest after playing all 16 of Ulster’s matches this season.

Significantly, their primary ball-carrier Nick Williams is also back in the starting line-up.

Against that, a minor back tightness has prevented new Ireland captain Rory Best from training fully this week, so he will start the game on the bench. Hence Rob Herring will deputise as both hooker and captain.

Furthermore, Ruan Pienaar has been ruled out by illness, while Wiehahn Herbst (sorely missed at scrum time in Oyonnax two weeks ago) has a foot injury, so Paul Marshall and Ricky Lutton come into the side at scrumhalf and tighthead, while Sean Reidy will continue at open side in the absence of Chris Henry due to his shoulder injury.

As a result, Paul Marshall starts inside Paddy Jackson, while Jared Payne again plays the second game of his comeback from the broken foot he sustained in the World Cup at fullback in what is his belated seasonal re-appearance at the Kingspan Stadium.

“They are a good team and they will provide a big challenge for us,” said Kiss.

“We need to stay focused on our game, make our tackles, start the match with the right attitude and play with discipline, because they can hurt you if you give the ball away easily. They showed that last week against Toulouse and against us a fortnight ago.

“We know our best chance of going through will be by earning a bonus-point victory. We’re optimistic that we can get the job done and with the unpredictability of this competition, there’s a real chance for us to go through. Hopefully there will be a good crowd at Kingspan and we can give them something to cheer about.”

Verdict: Ulster to win, but maybe not cover the handicap.

1 Wexford best the weather and Kilkenny on a mad day to be hurling
2 Few, if any, have given as much to Munster as Garrett Fitzgerald
3 ‘Your father works for my father’: Schools rugby turning toxic in the stands
4 On healing and wild hurling: The re-education of Diarmuid Lyng
5 Keith Earls far from ready to abandon centre stage
Real news has value SUBSCRIBE

TV View: No Beano on the couch as Dennis proves a right old menace 19:06
Newcastle feel the heat as Arsenal get some of their old mojo back 18:47
Clare pull well clear of Laois to keep unbeaten run intact 17:51
Offaly pick up first league win 17:44
Wexford best the weather and Kilkenny on a mad day to be hurling 17:36
Here is your handy guide to sport on television this week