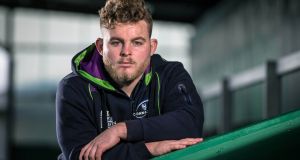 Physicality is something that comes naturally to Connacht’s rising young prop Finlay Bealham, who is expecting another bruising challenge against Newcastle on Sunday.

In taking a leap of faith to follow his rugby dream, Australian-born Bealham is now reaping the reward since moving to Ireland five years ago, and he has rugby league to thank for some of it.

“I come from a rugby league background, so I enjoy a bit of physicality,” said Bealham, who has Irish relations. “If I can bring that to the team and try to be effective that way, it is something I love to do.”

Physicality is an attribute that cannot be coached, according to Connacht coach Pat Lam. “You either have it or you don’t”, he said of his 24-year-old prop, who this season has featured in every game.

On Sunday Bealham is relishing the prospect of another physical tussle with the Falcons when Connacht, as Pool One leaders, attempt to maintain their unbeaten record in this season’s European Challenge Cup in the second of the back-to-back pre-Christmas fixtures.

“Newcastle are tough, and like every English team they are forward-orientated. They come hard at you from the front, through the scrum and the maul, so we have our work cut out for us, but we will prepare accordingly and come up with a strategy.”

Growing up in Canberra, Bealham played league from ages 11 to 17, while also playing rugby for his school St Edmunds, resulting in his selection on the Australian schools team. But with no rugby contract on the horizon, he moved to Ulster where his grandmother lived, and within a season was playing on Mike Ruddock’s Ireland under-20 squad, joining Connacht’s sub academy under Nigel Carolan.

In addition to physicality, his versatility in the frontrow has been a blessing for Connacht given the continued injuries – last week stepping in to loosehead.

“I have played more tighthead at this level, but I played loosehead growing up, so it wasn’t too much of a change. In every position you need to know your role, and be able to execute if called upon. Last week I was called upon to play loosehead, I knew the role quite well. I had to go over a couple of things, but if you just prepare well, then you get a performance at the weekend.”

Promoted to a senior contract last season, along with local players Darragh Leader and Conor Finn, Bealham is growing in stature and confidence in this close-knit Connacht group whose horizons have been broadened in this season’s European competition.

“I really liked Russia. The trip was very good, even getting delayed by a couple of days – hanging out with the lads, a lot of banter. And to get the result in tough conditions, it was a test of character and we did quite well I thought.

“I am happy enough with my form. There is always room to get better, and every week I am looking to fix something small. I like staying busy, involved, but maybe my prep is better this year. I am into the habit of prepping my week and enjoying the challenges.

“I can never get complacent. I keep working on everything and there are things to do during the week outside the schedule to make yourself better. I always look to do that so I can produce a performance at the weekend.”

Rewarded with a place on Ireland’s Emerging squad this season with seven fellow Connacht players, Bealham is an exciting prospect – an example, says Lam, of the improvement a player can make from the academy to senior contract.

“When I for saw Finlay tackle, I thought ‘holy heck’, and you could see he came from a background and loved to hit people legally and within the structures. It is all very well hitting hard, but it’s about getting him to bring that physicality into our defence system, our scrum systems, so in Finlay you have someone who has it, a player who is able to grow and mould, and that is exciting.

“Obviously he’s become bigger, and to do that he has put the work in. We are seeing the fruit of his attention to detail and what he wants to improve over and above his normal training. It is a really good process these guys are driving – they are hungry to get better – and that is exciting as a coach.”