Erasmus must plan for Glasgow game in midst of widespread grief 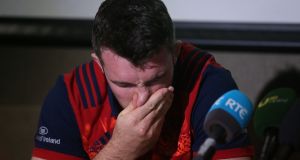 One’s life was enriched for having come across Anthony Foley, and placed in the most difficult week imaginable in his fledgling time as the Munster director of rugby, Rassie Erasmus yesterday spoke of how Foley warmly welcomed him into the province’s coaching set-up and how the South African came to regard him as a friend as well as a colleague.

That Foley should place Munster first and his own ego a long way second was typical of the man, and Erasmus also revealed yesterday that this process began as long as ago as last April, when the South African was first interviewed for the position as director of rugby.

“When I came for the interview, way before I had the job, I met him, and those would be the kind of people, with that passion, that I wanted to be part of, because I knew about Munster a long time before I met Anthony, apart from playing against him. And then when I sat down with him in the hotel and discussed [Munster] with him, I wanted to be here. That’s how welcome he made me feel. And that’s basically it.”

“It will. It will. His detail around the game was exceptional and then his personality was exceptional. The way he did things was just different. I’m talking now from a rugby point of view, not going into anything else outside rugby. For me it was just exceptional the way he went about things, and what he knew about the game and I’m probably going to say that the whole time. It was exceptional. It was really exceptional.”

“You could have a video session, you could name a player or a move and he would have seen it, thought about it and he could tell you the minute it happened in a game. His legacy for me personally is family, children and rugby. That’s how I sum him up personally.”

Munster host Glasgow this Saturday in Thomond Park. Erasmus has the daunting task of somehow managing the squad, emotionally, technically and every which other way.

“We have to. It’s something tragic that has happened and everybody has to deal with it differently. And then the next two days will obviously be testing.

“The big thing is to monitor that. The support from Munster, right from Garret Fitzgerald the CEO right down to ground level has been very personal, very professional on an individual basis, and I think we are doing the best we can with that. And as long as we do that, we’ll try to be okay.”

“It’s difficult, everyone knows it’s difficult. I know the players had so much respect for him that they are trying to get on with it and trying to do the job the way we think and the way they know Anthony would want us to go on with it. That’s what drives us, it’s what makes us committed to putting in a proper performance.”

It would also be fitting if Thomond Park was packed to the rafters.

“It would be, when I’m saying that I do it with all the respect in the world, it would be fantastic for the people to come and do it for Axel as the players are going to do it for Axel. Actually, the way we’re doing it is more important than anything else because we knew the way he wanted to do things. It wasn’t a grey area for us. It would be fantastic for the people who have been unbelievable until now. It’s crazy the support out there, and it would be great if they are there on Saturday.”

Both the tournament organisers, EPCR, and Glasgow Warriors, kept at arm’s length in allowing Munster time to make a decision about Saturday’s game, with Erasmus unsure as to whether they had been consulted.

“Not that I know of. As I said, the opportunity to play this week, with all the respect which we have obviously, it was the most important thing to play the game for him you know. So we didn’t go down that route to discuss with them . . .”

Gregor Townsend’s playing and coaching career coincided almost exactly with that of Foley’s. Six months younger, Townsend yesterday spoke of a rivalry and friendship that went back to their schooldays, and he showed a sympathetic understanding of Foley’s and Munster’s place in the European Cup, of events this week and now what will be the case this coming Saturday.

“Munster was probably the team that shaped the Champions Cup for what it is today; winning away from home, winning in France, getting to finals, winning big games in those finals and having huge travelling support. In that period I was fortunate enough, I was playing for Castres and I think we played Munster five times over two seasons and Anthony was a key player for them.

“We played against each other a number of times. I think we played each other in the schoolboy teams a long time ago, the Munster games and Ireland. He was aggressive and intelligent too. A really good modern number eight with a great ball-carrying side to his game.”

“I was looking forward to catching up with him. He was always very good after games whether Munster won or we won. As I got to know him more, as coaches, he would always come up and chat with you and be honest and share what was going on in his world as a coach.”

Townsend knows there will be a lot of emotion at Thomond Park on Saturday.

“I think it is a game to remember what Anthony did and help create at Munster. He was one of the key players that got them that success and he was also a very good coach.”

“We always knew it was going to be a huge occasion. Munster in the Champions Cup are a different team. They play at a much more intense level. I would imagine it would be a huge game in terms of crowd support. Our players appreciate the enormity of what has happened and being involved in the game will hopefully bring out the best in both teams.”