Connacht have too much for weakened La Rochelle 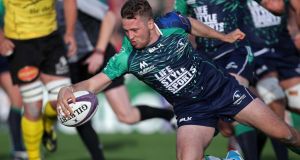 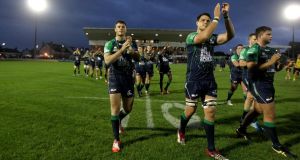 The result was never in doubt after the home side had posted their fourth try by the 36th minute, and although the visitors grabbed two tries in the second half, it was a facile opening challenge for the Irish province in Pool 2.

While Connacht coach Pat Lam had selected a strong XV, his French counterpart had failed to show the same respect for this competition with a team of predominantly Top 14 replacements — far from the side that had beaten Toulouse 37-25 two months ago.

And it showed in the opening minutes when outhalf Jack Carty found the gap following a five-metre scrum to post the first of Connacht’s seven tries.

Four minutes later Connacht benefitted from good line-out possession and Marmion’s flat inside pass found Darragh Leader at pace. The fullback made all at the running, before supplying the Connacht scrumhalf who finished off to give the hosts a 12-0 lead.

Although Ronaldson missed the conversion - his only miss of the evening - he posted a 14th minute penalty five minutes later when La Rochelle were caught offside.

At that stage it looked like Connacht would grab the bonus point well before the break, but the visitors staged a brief attack from a penalty kicked to touch. However, Connacht’s defence was well up to the task, while in attack, the backs, led by Marmion, relished the possession. Although Leader was denied a try when Robbie Henshaw’s pass to Nathan White was deemed forward, Henshaw crossed for the first of his two tries by the 32nd minute.

With the visitors a man down with prop Vincent Pelo in the sinbin, Connacht capitalised with a textbook lineout and drive before the ball was spun wide with Henshaw finishing under the posts.

Ronaldson added the extras for a 22-0 lead.

As the rain started to fall so did the visitors’ interest, failing to roll away at breakdown and sloppy in their defence. Penalised yet again, Connacht once again took advantage with Marmion supplying prop Ronan Loughney who finished in the right corner and Ronaldson converted for a 29-0 half-time lead.

La Rochelle did make some effort to get back into the game after the restart with winger Damien Cler crossing, but Connacht responded immediately.

The excellent Faloon produced the turnover on half way and La Rochelle’s defence on the left was found wanting as Leader supplied Henshaw who raced clear from the 22 for his second touchdown.

Six minutes later it was right wing Danie Poolman who scorched the defence to add his name to the scoresheet, and the seventh try came from a counterattack deep in the Connacht half, initiated by Henshaw. George Naoupu and replacement hooker Dave Heffernan found space and left wing Matt Healy finished off.

La Rochelle replacement wing Charles Lagarde did grab a second try for the visitors, but it was Connacht’s 4735 fans who were celebrating another European victory.