Secondrow will remain at regional side until after 2015 World Cup 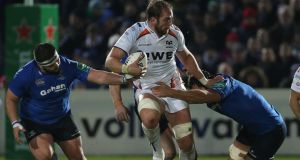 Alun-Wyn Jones, pictured here in action against Leinster at the RDS, has signed a new deal at the Ospreys. Photograph: Niall Carson/PA

Alun-Wyn Jones has given Welsh rugby a huge boost by signing a new contract with the Ospreys.

Jones, a mainstay of the Wales team who captained the British and Irish Lions in their Test series-clinching victory over Australia in Sydney last summer, has agreed new terms until after the 2015 World Cup, the Ospreys announced.

Jones’s decision comes against a backdrop of political unrest between Wales’ four professional regions and the Welsh Rugby Union (WRU), and bucks the trend of top players moving abroad which continued on Thursday when fullback Leigh Halfpenny agreed a lucrative deal with reigning European champions Toulon.

Jones, 28, had been the subject of intense speculation that he would quit Welsh domestic rugby at the end of this season.

Several of his Wales colleagues, including Mike Phillips, Jamie Roberts and Dan Lydiate, already play in France, while Halfpenny, centre Jonathan Davies and lock Ian Evans will join the exodus later this year.

Jones, though, is staying put, with his decision announced just eight days before Wales kick off their Six Nations title defence against Italy in Cardiff.

The 74 times-capped forward is favourite to captain Wales in that game if squad skipper Sam Warburton does not return from a shoulder injury.

“I am very happy to be able to resolve my future, which means I can now concentrate solely on my rugby,” Jones said.

“It’s flattering to have received offers from elsewhere, but at this point in my career my focus is on being in the right environment to ensure the longevity of both my domestic and international career.

“It’s important to me that I am playing the right level of rugby to ensure I am at my best, which is why it makes sense for me to accept the offer on the table from the Ospreys.”

Jones made his Ospreys debut in 2005, he is their current captain and he was a key figure on the last two Lions tours, featuring in all six Test matches.

Ospreys operations manager Andy Lloyd added: “It will give everybody involved with the region – players, coaches, staff, commercial partners and supporters – a huge boost.

“Alun-Wyn has been, and continues to be, a fantastic servant to this region and is a true role model to those around him.

“A natural leader, he demands the highest standards of himself and everybody in this environment, and it will be a better place with him around in the coming seasons.

“Given the uncertainty that still surrounds the game in Wales in general, we’ve given Alun-Wyn reassurances regarding his future options, but it is fantastic news that he is staying at the Liberty Stadium.”