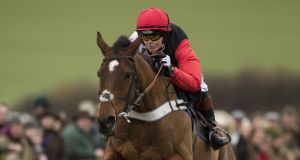 It is not the biggest horse race that will be run in Britain or Ireland tomorrow and it’s surely not the most lucrative. Ordinarily, the 4.15 at Fakenham on a nondescript Friday in February wouldn’t have much in it to detain anyone outside of a few docket-rippers chasing their losses from the 3.40.

Yet the digital backwaters of At The Races will see a few ripples all the same when double Olympic champion track cyclist Victoria Pendleton makes her racecourse chase debut as a jump jockey.

Pendleton rides Pacha Du Polder, a hardy old campaigner from the yard of champion trainer Paul Nicholls. Though it’s a horse whose best days are some way in the past, both Ruby Walsh and Tony McCoy have posted wins looking out through its ears before and it’s the highest-rated horse in the race by a fair distance.

But it’s fair to say the bookies won’t go broke if Pendleton gets it across the line in first place tomorrow.

Simply getting it around the course will be a good day’s work. This race is a crucial stepping stone for the former cyclist whose ultimate aim is to ride Pacha Du Polder in the Foxhunters Chase on the Friday of Cheltenham next month.

Given that it is almost a year to the day since she sat on a racehorse for the very first time, to have even made it this far is a serious achievement.

“She’s a lot of experience under her belt, she’s done a lot of point-to-pointing over the past few months. This now on Friday in Fakenham is the next step. She has her licence and she obviously would have had to have gone through various tests to get it. Once she can get the horse there in one piece, she’s fully entitled to go and ride in the Foxhunters.

“It’s a huge ask. Obviously she’s a highly competitive athlete coming into it. The first time she sat on a horse was this month last year. I’ve never spoken to her but I was talking to one of her team at the Grand National weights launch on Tuesday, a guy who is quite heavily involved with the whole thing, and by all accounts, she’s absolutely loving it.”

Pendleton has been backed in her endeavours for the year by Betfair, who have branded it the Switching Saddles Challenge. Snappy though the title may be, it probably makes it sound a lot more feasible and doable than the reality.

Pendleton isn’t just hopping off one piece of cushioned upholstery and sliding onto another. She’s going from a standing start to the Cheltenham Festival in a little over 12 months.

“I’m sure,” she said before Christmas, “that a lot of people have rolled their eyes and said: ‘What a publicity stunt – she’ll never do it. That’s ridiculous.’ But you don’t get on a racehorse and jump a steeplechase fence for a publicity stunt. It’s not like me standing next to a horse, smiling.”

That wouldn’t really be her style. Pendleton has always been by a distance the most interesting of the army of faceless stars hidden under the teardrop helmets of the Team GB track cycling machine. She openly hated bike racing and always said she felt blessed and cursed to be good at something she didn’t enjoy doing.

She fell in love with one of her coaches and later married him and was always candid about resenting the fact that he had to leave the team when their relationship became public. Whatever the future held once her cycling career finished up after London 2012, a quiet life of needlework and neighbourhood watch meetings was hardly going to cut it.

But nobody could to the work for her. Nobody could get out of bed before dawn for her or take the falls that have inevitably come her way. She has been unseated on occasion – once on the straight, the ultimate indignity for a jockey. But she has kept getting up and getting on and kept coming back for more.

“It has been a case of one step after another in the right direction,” Nicholls said last week. “I wanted to be satisfied at Milborne St Andrew [point-to-point meeting, where she came second] that Victoria was ready for hunter chases and I’d say she passed the examination with flying colours.

“She sits quietly on a horse, is tidy over a fence and is unbelievably determined. She has taken in all the advice she has been given, works tirelessly on her fitness and rides out six days a week.

“Frankly, the improvement Victoria has made since she began this odyssey is phenomenal and she now looks the part when she comes down to Ditcheat to ride on our gallops.

“Should Victoria reach Cheltenham, her and Pacha Du Polder are more than capable of finishing in the first six, which would be a superb achievement.”

“The only thing that is probably the same is the speed factor,” says Walsh.

“She is used to going fast and I think that must be a big factor in her even getting this far with it. Because in my experience, speed is what usually puts people off. She’s obviously used to controlling her bike at high speeds and she would definitely have come across times where she missed a stride or took a misstep on her bike.

“That happens a fair bit in racing too but it can spook people if they’re not used to it. I think that’s probably an important side of it for her – she can relate to that a lot easier than say, if she was a tennis player trying to do this.

“She would have experienced that fear of going at a high speed, having a wobble and knowing that if you come off, you’re going to have a hell of a fall.

“There will be times when she’s coming down to a fence and she’ll be thinking, ‘Shit, if I don’t get this on the right stride, I’m going to get absolutely planted’. It must be a big help to her to already know what that fear is like and to be able to relate to it. Most people wouldn’t have that starting off.”

Whatever it is she has, Cheltenham will test it. Her team say no final decision will be made on her participation until the week before the festival in the middle of next month. It would be a shame to put a year’s work into it and not line up at the end of it but if Fakenham doesn’t go well, they won’t be reckless with her. Nor will they let her be reckless with herself.

“She’s qualified to ride in it anyway,” says Walsh. “She has her licence. But at the same time, she’s used to being coached as well. And if the people around her who have been guiding her through it say, ‘Look, you shouldn’t do this’, she won’t. It would be like Dad coming to me and saying I shouldn’t ride in a particular race. I’d just be like, ‘okay’.

“She’ll be the same. She’s not going to throw the toys out of the pram, she’s going to do what is right for her. She will want to go there in the best frame of mind that she can and if I was her, I’d leave it as long as possible. The horse is entered, she doesn’t need to decide until the week of the race.”