Row deepens between bookmakers and industry over profit sharing 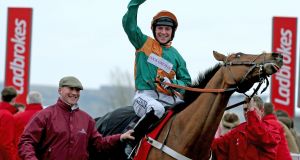 Ladbrokes will be shut out of sponsoring at next month’s Festival after 10 years as backers of the World Hurdle, it was announced on Thursday. Ryanair will take over as race sponsor of the three-mile race, which is worth £300,000 (390,000).

The news amounts to a hardening of positions in the continuing row about what share of their profits bookmakers should be paying to racing in Britain, as it is Ladbrokes’ failure to agree a funding deal with the sport’s ruling body that has led to their being ousted from Cheltenham.

Under the Authorised Betting Partner (ABP) scheme, introduced in November, only those bookmakers who have come to terms with the sport will be allowed to ink new sponsorship deals with many of the main tracks, including Cheltenham.

It had been thought that Ladbrokes’ desire to continue their prestigious and high-profile association with the Festival might be the catalyst for an agreement of some kind. Now that that chance has gone, it is hard to imagine circumstances in which that firm can become an ABP; if their senior executives were at all minded to sign up, they would have done so in time to save their position at Cheltenham.

As a consequence, Cheltenham now needs a new firm to supply two large betting shops on its premises in time for the Festival, now less than four weeks away. Ladbrokes were offered the chance to continue running those shops, one in the enormous Centaur building and one in the Sovereign Bar in the main grandstand, but declined.

“It struck us as at least peculiar that our money and expertise were welcome in one part of the racecourse and not in another,” said Ladbrokes’ spokesman, David Williams. “We didn’t feel comfortable in continuing to run the shops.

“We are very disappointed about this. We wanted to sponsor and be there and we’ve now got to work out where we’re welcome. When you’ve invested in something for over a decade and then you take it away, that money may not come back quickly. That’s not a threat, we are just not the kind of firm that tends to do short-term deals.”

A Cheltenham spokeswoman confirmed on Thursday that the shops will have to be run by a firm which is an ABP. That dramatically reduces the options, since Bet365, Betfair and 32Red are the only major firms to have gained ABP status and of those only the first-named have any retail experience. Resolving this issue in short order must now be a high priority for the track, since a shortage of betting facilities on the site during the Festival would be a PR disaster.

Ryanair were already backers of the other Grade One race on the Festival’s third day, the Ryanair Chase. The British Horseracing Authority issued a statement to say that “an expansion of the support of a global brand for the Cheltenham Festival’s key races is good news and a testament to the value of British racing’s assets to major sponsors”.

A BHA spokesman did not want to expand on the ABP debate beyond insisting that talks were continuing with various firms.