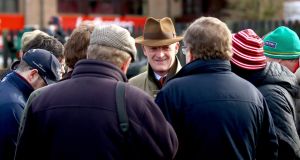 Willie Mullins: “I would rather run her in the Champion Hurdle than I would the World Hurdle.” Photograph: James Crombie/Inpho

Annie Power is the new favourite for the Champion Hurdle at next month’s Cheltenham Festival following the news that reigning champion, Faugheen, is out for the season.

The pair are stablemates at the yard of Willie Mullins, who kept his composure despite the ill-timed injury to one of his best horses.

“Faugheen will hopefully come back 100 per cent next season. We have a very good record, I think, with putting that type of injury back,” said trainer Willie Mullins.

But the champion trainer now has changed the plans for Annie Power.

Although Faugheen, a winner at the last two Festivals, is now on the sidelines with a damaged suspensory ligament, Mullins still has the first three in the betting for the big race on the opening day. He was a little surprised by the identity of those three, however.

“Arctic Fire, Nichols Canyon . . . is that what the betting suggests?” he asked the press corps in the winner’s enclosure here.

Someone mumbled that, in fact, Annie Power had now shot to the top of the betting lists and was no bigger than 9-4. “Go away!” replied the stunned Mullins.

The chestnut mare is not yet even entered for the Champion Hurdle, though she can be added to the race five days beforehand at a cost of £20,000.

Not seen in public since April, Annie Power was supposedly running here in order to help connections decide whether she should make a second attempt on Cheltenham’s Mares’ Hurdle, in which she fell last year, or go for a more ambitious tilt at the World Hurdle, in which she was beaten two years ago. But after her victory and after conferring with her owner, Rich Ricci, Mullins said the Champion was now her most likely target.

“It was little more than a schooling session for her, which is probably what she needs, rather than a really competitive race, to be honest. We can step up her work with an eye for Cheltenham. Arctic Fire and Nichols Canyon and Sempre Medici, they’re racing fit and Annie Power is not, I wouldn’t have said. You’d love to get another run in. But there isn’t time.” Guardian Service