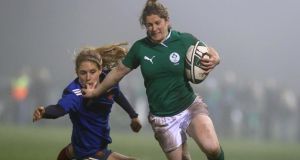 Ireland’s Alison Miller during the Six Nations game against France. The lack of sponsorship in women’s sport will be discussed at a conference tomorrow.

Call it a gathering, a meeting of the marginalised, the ignored and the sidelined. Women’s sport. It’s where the numbers who participate don’t seem to convert into column inches, air time or sponsorship deals.

It’s why a cohort of interested parties is meeting tomorrow to discuss and highlight a number of issues such as why women’s sport should continue to regularly tolerate patronising attention from across the sectors.

The movers and shakers at international level will make the point to those in the media and the marketing industry, who would show interest in schoolboy’s rugby but run a mile from a women’s international hockey match or Federation Cup tennis, that they should think about getting more involved now “at the belated start of genuine equality in sport”.

Women in sport have been quite polite about it all and maybe that is the correct way to go about things. But tomorrow the UCD Smurfit Business School in Dublin will host The Business of Women’s Sport, where some hard facts will emerge such as the single fastest growing element within sport, women’s participation, being virtually ignored by those who decide where to place commercial partnerships.

“Women’s participation in sport has risen from 27 per cent to 40 per cent in the past five years,” said Sport for Business Founder Rob Hartnett, who will address tomorrow’s convention.

That may be so. But does that mean more people want to read about women’s sport or watch it on television? Do participation levels convert to eyes on television screens and sports pages?

Won Grand Slam
“The two things I think are linked. The fact that the Irish women’s rugby team won the Grand Slam and made the RTÉ news . . . could that be because they are so good or because of increased awareness they are getting better. It is a virtuous circle,” says Hartnett.

Pointing out that the women’s European Soccer Championships in Sweden are being shown by the BBC for the first time this year could indicate the beginning of a new thinking. Liberty Insurance has also laid down a marker for the future by combining sponsorship of the All-Ireland Camogie Championship alongside the All-Ireland Hurling Championship. Women’s sport is beginning to secure more support than ever before and deliver better results, although not everywhere.

“Jonny Sexton, Brian O’Driscoll and Paul O’Connell go out on the pitch with an O2 logo on their shirts,” says Hartnett. “The women didn’t. Why should that be the case? They went out and won a Grand Slam. Just because something wasn’t the case doesn’t mean it always will be. Once you begin to break down barriers and one of those is participation, the momentum is shifting.”

Sports panel
A sports panel consisting of Sue Ronan, manager of the Irish national soccer team, Gemma Crowley, manager of the Irish women’s rugby teams, Mary O’Connor, director general of the Camogie Association and winner of 12 All-Ireland medals and Nikki Symmons, Ireland’s most capped athlete with 199 caps in hockey and seven in cricket will speak of their own experiences, all of them hoping “to reshape the environment in which women’s sport is operating.”

“Look at the personality driven coverage you would get from a women’s team competing in the next Olympic Games in Rio and the Irish women’s rugby team probably have the best chance of doing that,” adds Hartnett. “Look at the Olympic Games in London on super Saturday in the Olympic Stadium. Jessica Ennis was cheered just as loudly as Mo Farah was.”

A sports marketing panel of three individuals behind some of the biggest commercial partnerships in Irish sport will also take part in the day’s events.