Australian involved in heated exchange with umpire on Court 18 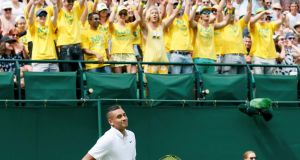 Nick Kyrgios in front of Australia fans during his match against Juan Monaco of Argentina at the Wimbledon. Photograph: Henry Browne/Reuters

Australia’s Nick Kyrgios kicked up another storm at Wimbledon after the 20-year-old was involved in a heated exchange with an umpire during his victory over Juan Monaco.

Kyrgios beat Monaco 7-6 (7/5) 6-3 6-4 in the second round on Wednesday but the world number 29 attracted attention again for a number of angry outbursts on Court 18.

The most controversial occurred at 6-5 in the opening set when a line judge made a complaint to the umpire after Kyrgios had uttered a string of expletives in response to his missed shot.

An altercation followed as Kyrgios was heard asking the umpire: “Is that a threat?” and “Does it feel good to be up there in that chair? Does it make you feel strong?”

The outspoken player, who made his name at SW19 with a shock victory over Rafael Nadal last year, was asked to explain the incident in his post-match press conference.

“I’m aware of what I’m saying. I’m in pain and I’m playing a tennis match at Wimbledon second round. A bit of stress out there. I guess that’s why he did it.”

Kyrgios added: “I just thought he thought he was top dog in the chair really. He was telling me not to speak to him, all that stuff. It doesn’t really matter, you know.”

Kyrgios also vented his frustration at a group of Australian fans, who are famous for their vocal support and sang songs supporting their compatriot throughout the match.

As the supporters began chanting while Kyrgios quarrelled with the umpire, he turned to them and said: “now is not a good time” before later telling them to “stop it”.

“I can’t even remember saying that,” Kyrgios said in his press conference.

It is the second controversy in three days for Kyrgios, who escaped punishment on Monday after appearing to shout “dirty scum” towards an umpire during his first-round win over Diego Schwartzman.

Kyrgios insisted he was directing the insult at himself, rather than the official.

There was less animosity on Centre Court where defending champion Novak Djokovic cruised to a straight-sets win over Finland’s Jarkko Nieminen.

Nieminen, who reached the quarter-finals in 2006, is retiring at the end of the season and his final appearance at Wimbledon took just an hour and 32 minutes as Djokovic eased to a 6-4 6-2 6-3 victory.

“It’s his last Wimbledon, I have had a very nice relationship with Jarkko for many years,” said Djokovic, who will play Australia’s Bernard Tomic in round three.

“He’s one of the nicest guys on the tour that I know on the court and off the court.

“In the present moment, maybe you are not aware how important it is, it’s a milestone for him, it’s his last match in Wimbledon.

“I’m sure he wanted to enjoy it a little bit so he deserved the ovation.”

Djokovic had to play through the hottest day ever recorded at Wimbledon with the Met Office recording a nearby temperature of 35.7 degrees Celsius.

“It wasn’t as bad as I thought,” Djokovic said.

“People were talking about it and predicting really difficult conditions but I didn’t find it as difficult as I thought it might be.”

Tomic will provide a tougher test, although the powerful 27th seed has never beaten Djokovic in the pair’s previous four meetings, which included a Wimbledon quarter-final in 2011.

“I expect him to serve well,” Djokovic said. “And I do expect him to mix up the game, come up with a lot of variety. That’s what he does.

“He has a very quick motion for the serve. It’s very difficult to read it on grass.

“This is the surface that he loves playing the most on so it’s going to be a difficult match.”

Ninth seed Marin Cilic was also made to sweat as he squeezed through 6-3 4-6 7-6 (8/6) 4-6 7-5 against Lithuanian Ricardas Berankis while Stan Wawrinka, Milos Raonic and Grigor Dimitrov are also safely through.

Fifth seed Kei Nishikori’s tournament is over, however, as the Japanese pulled out of his match against Colombia’s Santiago Giraldo due to a left calf injury.