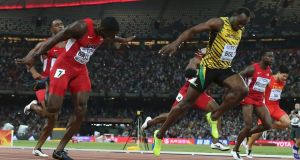 But then it was never going to be any ordinary sprint. Billed by some as the hero against the villain, by others as the race to save the face of the sport, it felt as if the entire athletics world – not just those sitting inside the Bird’s Nest – was holding its collective breath.

In the end, the look of utter relief, more than delight, on the face of Bolt after winning his third World Championship 100m title said it all: his narrowest possible victory over Justin Gatlin delivered not just the widely preferential result that Beijing wanted, but a thoroughly deserving one, too.

It was, as expected, tantalisingly close, and it also felt as if Bolt realised as much as anyone else what the implications would be had Gatlin won. The look of nervous, almost fearful apprehension on his face before the start certainly said that, too.

Because what was at stake, more than the gold medal and the World title, was the last glint of credibility of one of the track and field headline events at a time when the entire sport has been caught under the shadow of doping. Bolt’s victory was celebrated far beyond its actual worth, and certainly far beyond Jamaica.

As it turned out, Bolt didn’t just need to be the fastest man on earth to win this one: he also needed to be the most competitive. Indeed, for a man who has run it in 9.58 seconds with apparent ease, and also won two Olympic sprint doubles in succession, it also felt as if a large part of Bolt’s legacy was riding on it, too.

Then, when it came down to it, it wasn’t just his speed that won it for him, but clearly his own belief, too. Gatlin, as both his heats and semi-final suggested he would, stole an advantage from the starting blocks. He was up on Bolt at 50 metres and after that Bolt had to pull hard on every one of his enormous strides just to get level. Only in the final few metres, as Gatlin suddenly wilted, did Bolt get his big broad chest in front. Gatlin was timed at 9.80, behind Bolt’s season best of 9.79.

“I definitely think this was my hardest race,” Bolt admitted. “I’ve been through a lot this season, and it’s been rough. Coming back from injury I’ve had a lot of doubters, it’s been a tough road, so for me to come to the championships and defend my title is a good feeling.”

It wasn’t so much that people doubted Bolt, but rather how undoubtedly impressive and consistent Gatlin has been over the last two seasons: now aged 33, and nearly 10 years after committing a second doping offence, Gatlin has also been getting faster all the time.

Gatlin also came to Beijing unbeaten in 27 races, and after running a lifetime best 9.74 for the 100m in Doha, at the start of the season, making him the fifth fastest man in history. Even if Bolt had beaten him in six of their last seven meetings (Gatlin last beat Bolt at the 2013 Rome Diamond League), nothing about Bolt’s performance in the heats and semi-finals suggested he had the ability to run down Gatlin like this.

Along with the relief, then, there was also a sense of surprise that Bolt had actually managed to pull it off. Now 29, and nowhere near his 9.58 form of the 2009 World Championships in Berlin, there was certainly some doubt over whether or not Bolt could still bring the best out of himself when it mattered most.

Bolt has certainly faced some close rivals in the past, including Jamaican teammate Yohan Blake at the London Olympics, but never a rival with the better form and perhaps greater motivation as Gatlin. Delivering the best performance of the season when it matters most doesn’t get any easier for an athlete with a drawer already full of gold medals, and given all that was at stake here, it may well rank as one the most impressive if not important victories of his entire career.