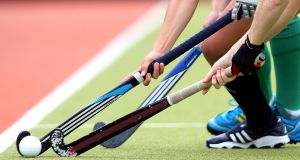 After their dazzling exploits in the semi-finals of the Irish Senior Cup last weekend, Ards and Ulster Elks, who ousted Hermes and UCD to set up an all-Ulster final, return to Hockey League action this weekend.

With four games left to play, Elks are chasing a top-three finish, one that would guarantee them a place in the end-of-season Champions Trophy.

They’re currently fifth in the table, three points behind second-placed Pegasus, with leaders Hermes having already sealed the league. Should Elks miss out, winning the ISC would get them in to the Champions Trophy too.

But they will expect to boost their top-three hopes when they take on bottom club Greenfields, as two of the teams above them, Pegasus and Railway Union, face each other.

Third-placed UCD, a point behind Pegasus and one ahead of Railway, host second-from-bottom UCC and a win for UCD would be welcomed by Ards who are battling to avoid that relegation play-off spot. After knocking Hermes out of the ISC, Ards have a tough away game at Cork Harlequins – who have their own top three ambitions.

Meanwhile, a three-game series against Britain was announced this week, the Irish team taking on their hosts at Bisham Abbey later this month.

The games form part of Britain’s build-up for the Olympic Games, while Ireland will use them as preparation for the Hawkes Bay Cup in New Zealand in April. Hermes’ Sinead Loughran is the one new face in Graham Shaw’s squad.