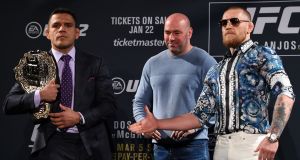 UFC president Dana White has said UFC is not for sale after rumours of a €3 billion sale of the mixed martial arts organisation surfaced. Photograph: Jeff Bottari/Zuffa LLC via Getty Images

The owners of the UFC may be close to selling the wildly-popular mixed martial arts organisation for more than $3.5 billion (€3.05 billion) according to an ESPN report.

Brothers Lorenzo and Frank Fertitta, who own 80 per cent of the UFC have been rumoured to be interested in selling the UFC for some time. The report names WME/IMG, China Media Capital, The Blackstone Group and Dalian Wanda Group as bidders and suggests the price for the UFC could rise to as high as $4 billion (€3.5 billion). It would be a massive profit for the Fertittas and possibly part-owner Dana White, the organisation’s president, should he choose to sell as well. The Fertittas and White bought the UFC in 2001 for just $2 million (€2.1 million).

White told Yahoo Sports and the Las Vegas Review-Journal on Tuesday that the UFC is not for sale, and some have questioned whether the owners would sell a product that is booming in popularity.

But if a sale does go through, a bigger question for MMA fans is what would a sale mean for the UFC? The ESPN story says Dalian Wanda is presumed to be the frontrunner to buy the organisation. The Chinese company is run by Wang Jianlin, who is believed to be one of the richest men in China. He appears interested in amassing an international entertainment empire having recently bought Hollywood studio Legendary Entertainment and a stake in Atletico Madrid.

Much of the UFC’s success comes from their tight management and a favourable business model. White holds considerable control over bout pairings and the organisation keeps most of the profits from its big fighting events rather than share them with the fighters themselves – a dramatic shift from boxing where the fighters get the bulk of gate and pay-per-view revenue.

The model has worked well for the UFC which made $600 million (€525 million) last year according to the Fertittas, although the organisation’s biggest star, Conor McGregor, has recently pushed back against the strictures placed on his career.

The Fertittas and White are credited with saving the UFC when they bought it in 2001 as well as giving the organisation a stronger sense of regulation. As MMA has grown in popularity, pushing into the mainstream, they have tried to move past US senator John McCain’s characterisation of the sport as “human cockfighting”.

UFC has added safety standards, implemented a strong anti-doping program and shown interest in their fighters’ health. Currently they are participating in a Cleveland Clinic programme supported by McCain to monitor the progression of brain trauma in fighters. Recently, McCain told The Guardian that he believes MMA “has cleaned up their act.”

Would a new owner continue those efforts or perhaps even exceed them? Would that owner increase fighter pay? Chances are the UFC will not be the same as it is now. A foreign owner also might run fewer UFC events in Las Vegas, creating more international super-fights.