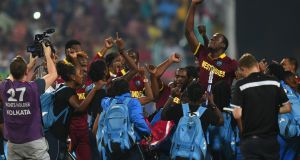 Carlos Brathwaite is besieged by media and teammates as he celebrates the West Indies’ victory over England in the World Twenty20 final in Kolkata. Photograph: DIbyangshu Sarkar/AFP/Getty Images

“It’s a backside nipper, is this,” said David ‘Bumble’ Lloyd, leaving the viewers wondering if that was a cricketing stroke they’d never heard of, or if it was Bumble’s version of squeaky bum time.

It proved to be the latter, the World T20 final between England and the West Indies a bit on the exhilarating side. “It’s absolute carnage and chaos everywhere,” said Shane Warne of the encounter, which was a reasonable assessment of this marginally bonkers but tremendous sporting skirmish.

As Ian Bishop put it: “CARLOS BRAAAAAAATHWAITE! REMEMBER THE NAME!”

Poor old Ben Stokes won’t ever forget it, that’s for highly certain. Until the end of time he’ll wake every morning hoping his nightmare about conceding four sixes off four balls in the last over was just that, an unpleasant but madie-uppie dream.

When Bumble spotted the inconsolable fella pleading with the Kolkata earth to open up and swallow him, he tried to offer him some consolation – “Ben Stokes, you’ve been part of a wonderful game of cricket!” – but you sensed that would be no consolation at all. It’d be liking losing your winning Lotto ticket and being told, “it’s the taking part that counts”.

What might be a consolation is that if the over had carried on, Brathwaite might well have Garry Sobers-ized Ben, such was the mood of his bat, but the World Cup was won by the fourth six, so we’ll never know.

Bumble, you fear, will be as much of a scapegoat as Ben, every British viewer bar none holding him accountable for England’s early batting woes because whenever he declared that “we have GOT to keep this partnership together”, a wicket fell.

And then, come that last over, he reassured all those viewers by telling them “we’ve got 18 to play with!”. Like they could start swigging the champagne already. In fairness, 18 was indeed a lot to play with.

“Did that just ’appen,” asked a disbelieving Andrew Flintoff back in studio, Mike Atherton mournfully confirming it did, Andrew looking so gutted he wanted to hail a pedalo.

Back in Kolkata, Brathwaite’s legendary status went through Eden Gardens’ non-existent roof when he took time to salute the West Indies’ “females” for also winning the World Cup, after they obliterated Australia by eight wickets earlier in the day.

“Your greatest moment yet,” he was asked.

If that lad outlived Methuselah, he couldn’t have a more magical day.

“They’ve a knot in their stomachs – and that’s not just down to the doughnuts.”

No, not England cricket fans going in to that last over. It was Rob Hawthorne talking about the Leicester faithful yesterday, who had been given free beer and a doughnut by the club owner, just when you thought you couldn’t love the club enough.

This time last year, we were reminded, they were bottom of the Premier League, seven points from safety. By the time they’d seen off Southampton, in a ‘1-0 to the Leicester’ kind of way, they were seven points clear of Spurs at the top.

Come on now, how could you not love sport?

By full-time Graeme Souness and Peter Schmeichel were debating how many wobbles Leicester could afford (two-ish), but at the rate they’re going it’s unlikely to be a backside nipper.

Not least because of the marvellous-ness of one of their players. As The Sport Bible explained it, “70 per cent of the planet is covered by water, the rest is by N’Golo Kante”.