Australian-born competitor wears her scars like badges of honour 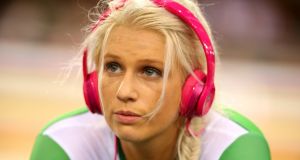 Shannon McCurley will be making history this summer as the first Irish female track cyclist to qualify for an Olympics. Photograph: Getty

There must, surely, be times when Shannon McCurley’s parents wish she had stuck with that nice, safe sport of middle-distance running. She had real promise, setting a Victoria U10 1,500m state record which also ranked her top five in Australia in her age-group before she veered off on a more precarious sporting route.

Yet her injury-enforced switch from athletics to cycling has had its rewards. If she hadn’t moved from foot to pedal-power the 23-year-old would not be making history this summer as the first Irish female track cyclist to qualify for an Olympics.

“I was pretty full-on as a kid,” McCurley says. “I did my knee as a 12-year-old playing netball and got on a bike for rehab. I did a few triathlons and quickly realised I was never going to be a swimmer but was pretty handy on the bike.”

She quickly excelled at criteriums (closed street circuit races), becoming the Australian U17 ‘crit’ champion and the top-rated junior cyclist (male or female) in Victoria. At 14, she even beat the Australian senior crit champion once.

But it hasn’t all been freewheeling.

When she was 15 a crash in a race in Perth split her bike in two and a handlebar punctured her thigh muscle (quad).

Just when she was re-finding her form she smashed her knee badly in the Bay Criterium in Geelong and lost a whole season to surgery.

Unhappy with the regional and state support she received at that time she looked at her options and declared for Ireland in 2010.

A bubbly blonde who looks and sound like an extra from Home and Away, McCurley embodies that likeable Aussie ‘can do’ scrappiness but she also has plenty of the fighting Irish in her.

Her parents (dad from Belfast, mum from Coolock in Dublin) emigrated in their 20s and attribute her talent and drive to her paternal great- grandfather who was an Ulster boxer.

“As time went on I started to really dislike pursuits and went more to bunch races because I’ve got pretty good bike skills and the explosive finishes always suited me,” she explains.

Scratch (group races with traditional ‘first over the line’ winners) was her best track event and in 2011 she finished silver behind Annette Edmonson (who won Omnium bronze at the last Olympics) at the Australian Championships.

A year later she won bronze at the European U23s behind Britain’s Laura Trott who took double-gold at London 2012.

But individual scratch is a non-Olympic event so McCurley had to switch to either the multi-event Omnium or the Keirin (pronounced ‘keerin’).

Her bad teenage quad injury means that gate starts do not suit her which ruled out the former.

The Keirin (one of Chris Hoy’s specialities) is the bizarre-looking sprint event where cyclists are paced for three-quarters of the race by a man on a moped.

Once he peels off it’s a flat-out dust-up for two laps and they reach speeds of over 40mph.

On a banked track with no gears or brakes there can be carnage and McCurley has had more than her fair share of spills in the past year.

A Korean opponent clipped her in a race in Adelaide last June. “I’ve got some good video of that. I pretty much face-planted into the wood, it was horrible.”

Three weeks later she fractured her coccyx in Germany and last December, two weeks before a key race in New Zealand, she was concussed after being hit by a car while out doing a recovery session.

Yet McCurley cheerfully wears her scars like badges of honour and subsequently had her best world cup result (13th) in that race.

Her two-year campaign finally hung on the world championships in London last month and three weeks beforehand disaster struck again when she had to get her appendix out. Yet that still didn’t stop her.

“The stitches were still in, I was lucky to even be on the bike. I was just in agony the whole time. I finished my repechage in tears and kept my helmet on so no one could see,” she admits, laughing.

“I was in last position going in to the worlds so knew I really had to race. My heat was really tough but I finished fourth in the repechage and that was enough to put me ahead of Azerbaijan and GB in the rankings.”

Now she can concentrate solely on Rio.

There are several outdoor velodromes within 45 minutes of McCurley’s home (Traralgon, a town of 60,000, two hours east of Melbourne) but her personal coach John Beasley also coaches the Malaysian track team so three times a week she makes the five-hour round trip to the city to train indoors with them.

She trains Down Under in winter/spring and then it’s over to Mallorca every June to join the Irish track team.

“I just chase the sun!” she jokes. “I have one category 1 race in early June in Melbourne but then it’ll be all training before Rio. I can’t afford any more crashes.”

“And for the last two years I’ve always had my hair in a fishtail braid when I race. One of the other girls – Josie Knight – always does it for me.

“It’s in the back of my head that she’s not going to be there in Rio so I’ve already been on to our masseuse Stacey Kelly to tell her she’s gotta learn it.”

Declaring for Ireland has certainly opened up a world of new colleagues, opportunities and racing for McCurley, as well as getting to know her Irish relatives, particularly her father’s cousins in Tallaght.

So how does she explain the Keirin to them?

“It’s all about positioning. If a gap opens you just can’t hesitate, you’ve got to think quick and take it. The last two laps are just full gas.

“I always loved racing growing up, even coming from athletics.

“I just love the adrenalin rush that you get from racing. I’m very competitive, I guess.”