Tour of Spain: Nicolas Roche comes in ninth behind Froome 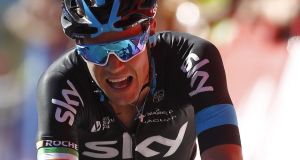 Nicolas Roche rode strongly on the stage-nine summit finish of the Vuelta a España on Sunday, netting eighth atop the first category summit finish to Cumbre del Sol.

The Team Sky rider mixed it with the specialist climbers and crossed the line 31 seconds behind the stage winner, Tom Dumoulin (Giant-Alpecin), who overhauled Roche’s team leader, Chris Froome, in the final 50 metres. Tour de France winner Froome had been below par earlier in the race but showed a return to form on the climb, launching several attacks and bridging across to Dumoulin after the Dutchman got clear with 1.7 km remaining.

However, although Froome surged with 300 metres left and dropped both Joaquim Rodriguez (Katusha) and Dumoulin, the latter was able to claw his way back to him and hit the line two seconds ahead.

“My tactic for the final climb was to attack on the flatter part and hang on on the steeper part. I could never have imagined that I could win a stage like this, but I’m in the form of my life,” he said.

The attack, the 10-second win bonus and the 59 seconds conceded by race leader Esteban Chaves (Orica GreenEdge) saw the Colombian slip back to third overall. He ended the day 59 seconds behind Dumoulin and two behind Rodriguez, who jumped to second.

For now, though, he sits fourth overall, one minute and seven seconds back, and will be satisfied with how he performed after crashing during the stage.

First cousin Dan Martin had a far worse spill on Saturday, being one of many riders who came down with just over 50km to go. He lay on the ground for minutes after the impact and didn’t get back on his bike; instead, he was taken to hospital, where a separated shoulder was diagnosed.

The accident is the latest in what has been a very frustrating season for him. He crashed several times this year, losing out on his chance of winning one of the Ardennes Classics in April, and also became ill in the second half of the Tour de France.

He finished second on two stages in the early part of that event and was also second and fourth on stages of the Vuelta a España. Martin was sitting third overall in the Spanish event until his fall on Saturday. He said yesterday that he believes the increased spate of crashes in the bunch is down to riders showing less respect for each other and fighting harder for position at crucial moments.

Although Martin’s Cannondale-Garmin team initially stated that they believed his season was over, he has made clear that he is aiming to return before the end of the season. His team was cautious about that, telling The Irish Times that more clarity will come after several days of recovery. If Martin can return, he will likely aim for a successful defence of his title in the Il Lombardia Classic. It takes place on October 4th, giving him five weeks. Unfortunately, the world championships appear out of the question.