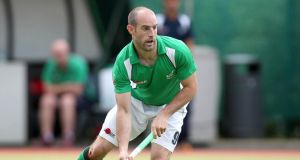 Maurice Elliott: had a second-half double for Pembroke against YMCA. Photograph: INPHO/Ryan Byrne

The top of the Leinster men’s division one table has a more recognisable look as Monkstown, Pembroke and Three Rock Rovers all won twice over the weekend to lead the way.

The trio are all on ten points from their four games to date, one ahead of Railway Union who also won twice on the first double weekend of the season, seeing the quartet all overhaul YMCA and Corinthian.

Town were the most impressive, thumping Corinthian 5-0 on Saturday afternoon before seeing off UCD by the same scoreline yesterday.

Pembroke, though, were made to work against both YMCA and Rathgar. Against the former, they ran up a flattering 3-0 scoreline as Maurice Elliott’s second half double added to a Ronan Flannery effort.

YM were left to rue six missed penalty corners - Pembroke had none - while they effected a massive 66 turnovers but could not convert statistical supremacy into goals.

It was even more fraught a day later against basement side Rathgar. Gary Sharman put the Chiefs in front at the break before Pembroke got back on terms via a Nick Burns penalty corner.

The winner, though, did not arrive until the last five minutes when Tim Hill applied a back post finish to steal all three points.

For Three Rock, Garry Ringwood rolled back the years with a double against Glenanne in a 3-0 win on Saturday. Employed primarily as a defender for the past five years, he reverted to his forward roots to score two classy goals.

At Rovers’ pitch opening on Sunday at Grange Road, first half goals from Peter Blakeney - in his first appearance of the season - and Luke Madeley scored early to secure a 2-0 win over Avoca.

Railway Union continued to impress with a 7-1 victory over Avoca on Saturday and then came from 2-0 down against Corinthian to win 4-2.