John Morrissey was, among many things, America’s bareknuckle boxing champion 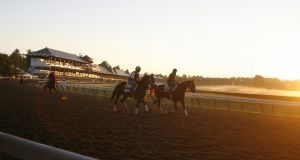 John Morrissey was reputedly just 17 the night he first walked into The Americus Club in New York, a notorious hang-out for the anti-immigrant Know-Nothing party. The native of Tipperary eyed up the hard-chaws and ne’er do wells and declared with teenage bravado that he could lick any man in the house. The mob that quickly set upon him was led by William Poole, or Bill the Butcher as he was later immortalised by Daniel Day-Lewis in “The Gangs of New York”. The vicious beating Morrissey suffered didn’t matter as much as the audacity of his arrival. Even those pummeling him could see the kid had something.

A month after the Battle of Gettysburg in 1863, Morrissey, by then trailing a resume that included brothel bouncer, cat burglar, political enforcer, gold miner and bareknuckle boxing champion of America, cobbled together four days of thoroughbred horse racing at Saratoga in upstate New York. A gambler by nature, he stumped up nearly $3,000 of his own as prize money, taking a punt on the idea that a nation suffering through a Civil War needed some distraction. On Friday, Saratoga opens for its annual 40-day season as the oldest track in the country with a tradition so enshrined that it trades on the simple slogan, “The August place to be”.

That the track he conceived and built (with the assistance of railway mogul Commodore Vanderbilt and some Wall Street titans) remains a fixture on the social calendars of high society is hugely ironic. Morrissey spent decades struggling to gain acceptance among the well-to-do who, no matter what he achieved, always held his humble beginnings against him. When old money families once conspired to stop him moving into a particular neighbourhood, he built a soap factory nearby, the stench from which wafted downwind and hung over their houses thereafter. He was not a man to cross.

Born in Templemore on February 12th, 1831, Morrissey’s parents, Timothy and Julia, brought him to live in the town of Troy, New York as a child. In search of a better life, they handed their son his passport to an epic. By the time he died of pneumonia, clutching a priest’s hand at the age of 47, the illiterate urchin who ran barefoot through the streets of his adopted hometown was being eulogized as a former Congressman and sitting New York State Senator. Twenty thousand lined the streets for his funeral and the flag at New York’s City Hall hung at half-mast.

How Morrissey came to be nicknamed ‘Old Smoke’ offers a glimpse of the tumult that prefaced those later years as a (mostly) respectable politician and sporting entrepreneur. During a brawl about the affections of a woman in the basement of a gun club, his opponent Tom McCann pushed him down onto a stove of burning coals and held him against them until his flesh began to sizzle. His friends jumped to his assistance, poured cold water on the embers and he recovered enough to beat McCann senseless. His body was scarred, his reputation greatly amplified.

While prospecting unsuccessfully for gold in California, he turned to more formal fighting. After collecting $2,000 for a victory over George Thompson, he met Yankee Sullivan in 1853 for the championship of America, an honour many considered the nearest thing to a legitimate world title at the time. For 36 rounds, Sullivan, a far superior technician, battered Morrissey so bad that his nose would never recover its original shape. When supporters of both men spilled into the ring however, Sullivan failed to answer the bell for the start of the 37th and the referee awarded Morrissey a dubious victory.

“I am a gambler and a prize fighter,” said Morrissey. “But no man can ever say that I turned a dishonest card or struck a low blow.”

That wasn’t strictly true. Parlaying his newfound fame into a certain type of prosperity, he opened a bar and a gambling parlour (a place where they dipped sugar cubes in honey and bet on which one the fly would land on first) and deepened his involvement in Tammany Hall politics, a vicious demi-monde where he could utilise his physique and reputation to good effect. As Morrissey and his wonderfully-named gang ‘The Dead Rabbits’ set about achieving hegemony in New York city, only the timely interventions of well-connected friends kept him from serving jail time for a series of assaults and his role in masterminding the murder of his old nemesis Bill the Butcher.

Along the way, he married Susie Smith, a wife who spent part of each evening diligently teaching her husband how to read and write. Numbers were always less of a problem for him. His idea to bring horse-racing to Saratoga where mineral springs already attracted a monied crowd each summer paid off hugely, especially when he deployed the still-nascent technology of the telegraph to facilitate off-course betting.

To provide a night-time outlet for gambling, he later opened the Saratoga Club House, a salubrious casino with a clientele that included Mark Twain, General Ulysses S. Grant and John Rockefeller. On the second floor where the heavy hitters gathered, fortunes were won and lost in what one writer dubbed “Morrissey’s Elegant Hell”. That building is a museum now but for the estimated one million spectators who will hit town over the next few weeks, the track remains a quaint old slice of racing heaven.