There was a time when 10 of the top 17 male players were American, but times change 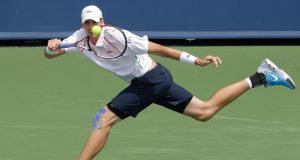 John Isner stands an imposing 6ft 10in, has served nearly 6000 aces in his career, and, at Wimbledon in 2010, defeated Nicholas Mahut in the longest match in the history of professional tennis.

Currently ranked 15th in the world, the 29-year-old has won nine tournaments, is the best American male player of the moment, and carries the hopes of a nation into next week’s US Open. Well, not exactly. Truth is most of his compatriots would struggle even to associate his name with his sport or, indeed, to pick Isner out of a line-up.

There was a time when 10 of the top 17 male players in the world were American and an adoring public was on first-name terms with them all. There were many, many times that five of the top 10 hailed from the US. Times have changed. These days, Isner is the solitary stars and stripes in the top 20, and only two others regularly crack the top 50. In the 11 years since an American last won a Grand Slam, Andy Roddick’s 2003 triumph at Flushing Meadows looks more and more like the end of an era, a turning point in history when one of the game’s superpowers began to crumble.

“We’ve done just about everything wrong,” said John McEnroe. “We’ve stood on our heels and haven’t been proactive about trying to get people into the sport. But there’s a lot of people out there trying to get at the reasons why we started to fade.”

McEnroe himself is one of those trying to address the problem. At his tennis academy on Randall’s Island in Manhattan tonight, he will host a benefit for the Johnny Mac Tennis Project, a charity he established to make the game more accessible and affordable to kids in the New York area. Perhaps only McEnroe has the cachet to get Novak Djokovic to headline an event, also featuring the New York Rangers’ goaltender Henrik Lundqvist and the actor Edward Norton, designed to raise money to fund his ambitions for getting the next generation of Americans back to the summit of the sport.

In a country with a playing population of 28 million, there are, inevitably, many different theories explaining the precipitous decline in quality of the American men on the court. They range from the intangible (the kids just aren’t hungry or desperate enough for success) to the practical (too many of them grow up playing on hard courts that prize power over shot-making and footwork) to the mildly xenophobic (too many foreigners coming here to take up tennis scholarships at the best universities).

At times, the philosophical debate about what went wrong and how to put it right is so wide ranging and constant it resembles the never-ending English attempt to figure out why the rest of the world got so much better at football. Of course, much like in that case, the calibre of players coming through here deteriorated just as the standard in other countries improved so much. That the dearth of American contenders coincided with the new golden age of the men’s game at least ensured the sport’s popularity in these parts has been largely unaffected.

Most people involved agree on the basics required to arrest the decline. An increase in properly-trained coaches, a determined attempt to get more athletic kids to pick up racquets at a young age, and clay courts (which help produce more rounded players with better fundamentals) to become available all over the country.

In an attempt at greater inclusivity, a 10 and under programme, promoting a simpler, easier and cheaper version of the game, has also been rolled out amid much fanfare.

The various initiatives may pay dividends a decade or so from now but the positive glow dims when you consider it still costs a family at least $2,000 a month to underwrite the career of a promising teenager. Noah Rubin, an 18-year-old Long Islander won Wimbledon junior boys earlier this summer, will share a court with Djokovic on Randall’s Island this evening, and may yet be his country’s saviour. In just one year though, it required more than $30,000 from the Johnny Mac Tennis Project to help keep him on the court.

Although he’s boldly insisted his academy take a holistic approach that encourages prodigies to live normal lives and not be slaves to the tennis machine, John isn’t the only McEnroe trying to restore America’s lustre. His younger brother Patrick is the (often controversial) head of player development with the USTA, one of those behind plans to build a new national training centre in Orlando, Florida, that will have more than 100 courts.

Investment on that scale is required because this isn’t just a male problem. There may be eight Americans in the women’s top 50 right now but it’s already accepted that once the Williams sisters finally depart the stage, a day drawing ever nearer, the outlook could be similarly bleak on the distaff side. That no American woman not named Serena or Venus has reached a Grand Slam final since Lindsay Davenport in 2005 tells its own story.

“Whether we can find those ones that can get to the promised land, nobody has the answer to that,” said Patrick McEnroe of the task ahead. “A lot of times, great players come out of nowhere or develop on their own.”

Either way, America is waiting.