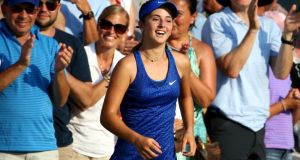 Catherine Bellis of the United States reacts after defeating Dominika Cibulkova of Slovakia during their women’s singles first round match on Day Two of the 2014 US Open. Photograph: Streeter Lecka/Getty Images

Bellis, the number two junior in the world, was making her grand slam debut and showed remarkable composure to win 6-1 4-6 6-4 against the 12th seed. Cibulkova looked to be on her way to victory after recovering from a chastening first set to win the second and then lead 3-1 in the third.

But back came Bellis and in her first ever tour-level match she broke the Cibulkova serve in the final game to take victory in a raucous atmosphere on Court 6.

Bellis, ranked 1,208, is the youngest player to win a match at the US Open since Anna Kournikova in 1996.

“I went into the match thinking it was going to be such a great experience, but I never thought I would come out on top,” said the teenager, who next plays Kazakh Zarina Diyas.

“It’s crazy to think that I’m actually here right now with all these other people. I never thought I would be practising or sharing a court with a player that I watch on TV frequently. It’s crazy. But I love it.”

Bellis’ amateur status means she is unable to claim the more than $60,000 in prize money for a first-round victory, but she is in no rush to turn professional. She said:

“I think I’m definitely going to stay an amateur right now to keep my options open for college, in case an injury or something happens. But I’d love to be a pro one day.”

Wimbledon champion Petra Kvitova avoided a repeat of 2011 in emphatic fashion with a 6-1 6-0 victory over Kristina Mladenovic. The first time the Czech won the All England Club title three years ago she struggled to deal with the expectation and lost in the first round at Flushing Meadows.

Kvitova, seeded third, went into the tournament with a title under her belt from New Haven on Saturday and is hoping to go beyond the fourth round for the first time.

“The other grand slams are a big challenge for me right now to do a good result,” she said. “Especially here, where I don’t really have a good result. So I’m really motivated to do well here. I remember 2011 when I lost my first round after winning Wimbledon, so I’m just glad that I’m better already.”

Eugenie Bouchard showed once again that she is a different animal at the grand slams with a 6-2 6-1 victory over Olga Govortsova. The seventh seed has won only won match since losing to Kvitova in the Wimbledon final but put her shaky form behind her.

“I’m happy,” said Bouchard, who has made at least the semi-finals at every grand slam this year.

“It’s definitely never easy in the first round of a grand slam so I’m happy to get a win under my belt. I want to get on a roll and keep the momentum going.” Bouchard only made her debut at the US Open last year, losing a close match to Angelique Kerber in the second round.

“I was just very excited to be on-site in the main locker room, all that stuff,” recalled Bouchard.

“Going into this one, I feel like the past few weeks have been a bit of a struggle. I don’t feel like I’m putting too many high expectations on myself. But I have the inner confidence that if I’m playing as well as I know I can, that I can do well.”

Azarenka has lost to Serena Williams in the final the last two years but the chances of her making it a hat-trick of finals look very slim. The Belarusian is only seeded 16th after a nightmare season of injury and poor form and made heavy weather of beating her diminutive Japanese opponent.

There were no such problems for eighth seed Ana Ivanovic, who is back in the top 10 and having her best season since winning the French Open in 2008.

The Serbian eased past American Alison Riske 6-3 6-0 and next plays Czech Karolina Pliskova. There were differing fortunes for two former champions, with Sam Stosur beating Lauren Davis 6-1 6-4 but Svetlana Kuznetsova marking the 10th anniversary of her title by losing in a third-set tie-break to Marina Erakovic.