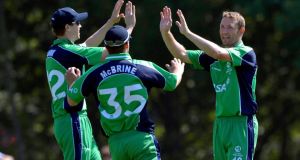 On his record 227th cap for Ireland, Andrew White celebrates taking a wicket with Andrew McBrine, who took the catch, and Nick Larkin in the one-day game against Sri Lanka ‘A’ at Stormont in Belfast. Photograph: Rowland White/Inpho/Presseye

Wicket-keeper Stuart Poynter looks set to make a late run for potential inclusion in Ireland’s squad for next year’s World Cup after he scored a stunning century in the 28-run defeat to Sri Lanka ‘A’ in the first of three one-day games at Stormont in Belfast on Wednesday.

On the day when his elder brother Andrew captained Ireland for a first time, Stuart was the one to grab the headlines as he rescued a side missing most of its regulars from a terrible start in their chase of Sri Lanka’s total of 283.

Stuart joined his older brother at the crease after Andrew White, who earlier became Ireland’s most capped player with 227, was bowled for three.

Ireland then slipped to 103 for seven and faced a huge margin of defeat before Stuart Poynter found some willing partners amongst Ireland’s tailenders.

Eddie Richardson retired hurt soon after having being hit on the jaw from a short ball from Dushmantha Chameera, who took four for 35 from his 10 overs.

Craig Young made 26 in an entertaining 61-run stand for the eighth wicket before No 11 bat Peter Chase, on his international debut, made an unbeaten 26 in a ninth-wicket partnership of 87 that allowed Poynter the chance to record his first international century on his eighth appearance.

The 23-year-old had got a taste of the Sri Lanka attack when he made 36 in Durham’s eight-wicket defeat to the tourists at Chester-le-Street last Sunday.

And he showed the rest of the top order how to do it as he played an attacking hand having survived a dropped chance on one. He made Sri Lanka pay, bringing up his 50 off 52 balls and going past his previous best of 63, made at the same ground against Australia ‘A’ last summer.

Despite the bang on the head, Richardson was willing to come back if required, but Malahide’s Chase played his part of the bargain to perfection to allow Poynter get to three figures and get Ireland closer to their target, even if they never looked likely to chase it down after such a poor start.

Poynter brought his ton up off the first ball of the final over, dispatching Lahiru Gamage for six, his century coming from just 85 balls and including one more maximum and nine fours.

He added two more fours before being caught at fine leg for 109 with two balls to go as Ireland finished on 255 for nine, with Richardson not taking the field again for the final two balls.

Ireland’s chances were dealt a double-blow before the start when Stuart Thompson and Graeme McCarter were both ruled out with niggling injuries, with Ireland coach Phil Simmons handing out debuts to Chase, opening batsman Chris Dougherty and Australia-born batsman Nick Larkin.

After winning the toss and putting Sri Lanka in, Craig Young struck in the first over to remove opener Kusal Perera for one.

A 106-run second-wicket partnership between Mahela Uddawatte (88) and Danushka Gunathilaka (57) was the key to their innings, with Richardson helping restrict the visitors to under 300 by claiming his first international five-wicket haul in just his third appearance – the North County player finishing with five for 61 off his 10 overs.

Andrew McBrine took three catches off Richardson’s bowling to finish with a haul of five, a record for an outfield player in a one-day game and matching the five taken Stuart Pollock in the first innings against the MCC at College Park back in 1956.

Simmons expects to be able to call on the services of Thompson for Friday’s second game in the series, while Pembroke all-rounder Barry McCarthy comes in for McCarter, who is to return to his county side Gloucestershire.