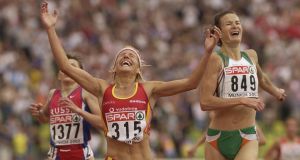 Sonia O’Sullivan is beaten by Marta Dominguez in the women’s 5,000 metres final at the 18th European Championships at the Olympic Stadium in Munich on August 10th, 2002.


No athlete can turn back the clock on their career. Few harbour any lingering regrets. But it must be frustrating when they’re left wondering what might have been as reports of doping violations continue to come in.

The news that Spanish distance runner Marta Domínguez has been identified as having anomalies in her biological passport will come as either a major shock or minor tremor, depending on what was believed in the first place: the biological passport, the latest anti-doping measure introduced by the IAAF, and which tracks the blood samples of athletes over an extended period rather than subjecting them to a one-off test, is a more drawn out process, and it could be several weeks before the full extent of her violation is known.

Temporary suspension
So, while Domínguez is facing a temporary suspension, any longer-term sanction or potential stripping of titles will only come after a further investigation by the Spanish Athletics Federation.

What is certain is that Domínguez, the 2009 world champion over the 3,000 metres steeplechase, is very well known in Irish athletics, particularly to Sonia O’Sullivan.

It was Domínguez who very narrowly beat O’Sullivan to the gold medal over 5,000m at the European Championships in Munich back in August 2002 (by .09 of a second), and while any potential sanction is highly unlikely to strip her of that title, it’s another reminder for O’Sullivan of what might have been.

Indeed on her first appearance on the world stage, at the 1992 Olympics in Barcelona, O’Sullivan led the 3,000m around the final bend, poised for the gold medal, before Yelena Romanova and Tetyana Dorovskikh, representing the unified Russia, darted past in quick succession.

O’Sullivan ended up fourth: a year later, Dorovskikh tested positive for steroids, and six years ago, Romanova died suddenly of unknown causes, at the age of 43.

Controversial coach
O’Sullivan was also run out of the 3,000m medals at the 1993 World Championships in Stuttgart by an unknown Chinese trio, products of possibly the most controversial coach in athletics history, Ma Junren.

None of Ma’s athletes ever tested positive, although six of his runners were among 27 athletes dropped from the Chinese team just before the 2000 Olympics after failing preliminary blood tests, aware they’d be testing for EPO in Sydney.

It’s far from the first time an Irish athlete is facing the likely realisation of being beaten by a drugs cheat, as confirmation emerged earlier this month of several positive tests involving Turkish athletes, including sprint hurdler Nevin Yanit, who won the 60 metres hurdles at the European Indoors in Gothenburg in March, with Derval O’Rourke finishing a very close fourth.

Should Yanit be found guilty she will be stripped of that title, with O’Rourke thus promoted to the bronze medal position.

Also, in January of this year, 2009 European Indoor bronze medallist Mary Cullen faced the same cursed realisation, after the Turkish and Ethiopian-born runner Alemitu Bekele, who took gold that day, was handed a four-year ban for a failed doping test, which she has since appealed to Court of Arbitration for Sport (CAS).

Beaten into second
Fionnuala Britton has also endured something similar after being beaten into second by the Turkish runner Binnaz Uslu in the under-23 race at the 2006 European Cross Country, in Italy, only for Uslu to fail a drug test the following March.