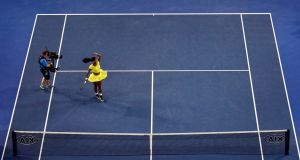 Serena Williams’ break from tennis at the end of last year to “just chill” appeared to have done her a world of good as the rejuvenated American bulldozed her way into the Australian Open final on Thursday.

The 34-year-old world number one totally demolished fourth seed Agnieszka Radwanska in the first set before she emphatically sealed her place in a seventh Melbourne Park final with three aces in the final game in the 6-0 6-4 win.

Every time the American has made the final at Melbourne Park she has gone on to win the Daphne Akhurst Memorial Cup.

“I needed time off just to take a minute and just chill and re-heal, get ready,” she said after the 64-minute battering of the Pole.

“I felt like I really committed myself ... it’s just a great thing to be in the final after taking such a long time off.”

Williams withdrew from the last four months of 2015 after she was bundled out of the U.S. Open in the semi-finals by Italy’s Roberta Vinci, ending her hopes of emulating Steffi Graf’s calendar grand slam in 1988.

The American, however, can join Graf on 22 grand slam titles, the most in the Open era, if she beats Angelique Kerber, who considers her fellow German Graf as her idol, in Saturday’s final.

Despite not wanting to tempt fate, Williams added she did not want to repeat last year’s memories of the U.S. Open, tacitly sending Kerber a message she better be ready for a similar onslaught that Radwanska faced.

“I was one off last year, too,” Williams said.

“If I don’t win on Saturday, I’ll still be one off. It took me forever to get to 18. I was so stressed out. I don’t want to relive that at all.”

Kerber, who is in her first grand slam final, will need to hope that Williams does not play like she did against Radwanska.

The world number one broke the Pole’s serve in the first game with Radwanska’s lack of power highlighted by the blistering nature of the American’s returns.

Radwanska’s fastest serve in the first game reached just 140 kph. Williams was returning the ball at over 130.

Williams cleaned up the first set in just 20 minutes before Radwanska elicited the largest cheer of the match when she held serve in the first game of the second set, avoiding an embarrassing potential ‘double bagel’ 6-0 6-0 score.

Radwanska managed her first break in the sixth game of the second set to level it at 3-3, giving the crowd on Rod Laver Arena an opportunity to produce a roar of support.

Williams, however, Williams broke again in the ninth game and then served out to end Radwanska’s agony on Rod Laver Arena.

“Going against Aga, you have to be ready or be ready to go home (and) I was able to do everything that I needed to do,” she said.

“I’ve always said that when I’m playing at my best, it’s difficult to beat me.”