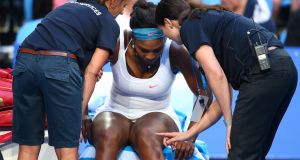 Serena Williams of the United States talks with Player Services staff prior to withdrawing from her singles match against Jarmila Wolfe of Australia Gold with a knee in jury during day three of the 2016 Hopman Cup at Perth Arena. Photograph: Paul Kane/Getty Images

World number one Serena Williams retired from her Hopman Cup match against Australian Jarmila Wolfe on Tuesday with a knee injury barely two weeks before launching her bid for a seventh Australian Open title.

Williams was trailing 7-5 2-1 when she decided not to continue after receiving medical treatment.

After pulling out of Monday’s tie against Ukraine with inflammation in her knee, the 34-year-old American hobbled through the match before deciding she could not go on.

Playing for Australia Gold, Wolfe took the first set as Williams struggled to move to her left.

“I have some knee inflammation that’s going away very slowly. It’s going, it just needs a little more time,” Serena told reporters, refusing to rule out playing in the Americans’ Hopman Cup match against Czech Republic on Thursday.

“I’m not making any decisions. I’m just taking it one day at a time,” the 21-times grand slam singles champion said.