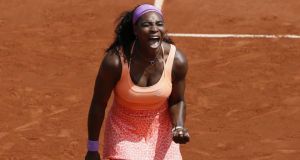 Serena Williams is through to the semi-finals of the French Open after a straight sets win over Sara Errani. Photograph: Afp

For a while on Wednesday, Serena Williams seemed ageless – and almost unfairly too powerful for her opponent, as she beat the Italian Sara Errani 6-1, 6-3 to advance to the semi-finals of the French Open.

While her prospective opponents, Timea Bacsinszky and Alison Van Uytvanck, were locked in a more even struggle on Court Suzanne Lenglen, Williams cruised through her most convincing win of the tournament in 65 minutes on Court Philippe Chatrier, although Errani fought hard in the second set.

It was a welcome return to form for the American who, suffering from the infection that had infiltrated the locker room in week one, had to come from a set down in three matches on the way to the quarter-finals, the 40th of her slam career and ninth at Roland Garros, where she has won the title twice.

The last time she lost at this stage of a major was in Australia two years ago; every time she has reached the quarters since she has gone on to lift the trophy: here and in New York in 2013, again at Flushing Meadows the following year and this year in Melbourne.

Williams’ ability to conquer swings of mood and focus is remarkable. If she is going to lose in these tournaments, it is usually when opponents catch her off-guard while building momentum – which the 105-ranked German Anna-Lena Friedsam , the rehabbing Victoria Azarenka and her compatriot Sloane Stephens must have thought they were going to do here after winning the first set against the 33-year-old.

Williams prevailed each time and reached a new peak against Errani. She is a virtually unstoppable train, especially after the unexpectedly early exits of Simona Halep and Eugenie Bouchard, followed by Maria Sharapova and Petra Kvitova – as well as Azarenka.

But the shock wave would roll to a halt on a warm, still Wednesday, the ball flying more reliably through the air as Williams struck 10 aces and 39 winners past Errani, who is 16 places below her in the rankings.

Errani, ahead in the serving cycle, gritted her teeth in the second set but, once Williams broke her in the seventh game, the contest moved steadily to its inevitable conclusion. Errani saved three match points in the ninth game before Williams sealed it to move within two wins of her 20th slam title. When it matters, she finds a way.