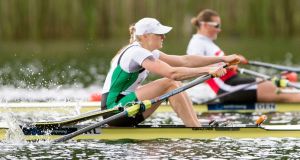 Sanita Puspure on her way to a second placed finish during the women’s Single Sculls Final race at the Rowing Olympic Qualification on Lake Rotsee in Lucerne. Photo: EPA

Ireland’s tally of rowing crews for Rio notched up to three as Sanita Puspure produced a confident performance to take second place in the single sculls at the Olympic Qualification Regatta in Lucerne in Switzerland.

Puspure had the form and the power to take one of the four places, and this time she also had the self-belief. She was fifth through halfway, but she passed three scullers from there and sprinted to within three seconds of winner Emma Twigg of New Zealand on the line. Double Olympic gold medallist Ekaterina Karsten booked her place in her sixth Olympics by finishing third and Denmark’s Fie Udby Erichsen, a silver medallist in London, took fourth.

Puspure, who is 34, said that work with Ireland coach Don McLachlan has left her strong. “In the three years Don has been working with me I have improved. We now have the fruit of those years. It’s exciting in a way,” she said. “We think it is just the beginning.”

McLachlan had his race plan vindicated: “We knew physiologically that she was in great shape and could come strong at the end.”

Sinéad Jennings and Claire Lambe, also qualified for Rio, rushed to congratulate Puspure. The begin their World Cup in Lucerne on Friday.

1 Gordon D’Arcy: There’s more to Saracens’ success than money
2 10-man Arsenal show their heart to rescue a point at Chelsea
3 As the UK tightens gambling laws Ireland still lags way behind
4 Seán Moran: Total disregard for schools as GAA votes one way and acts in another
5 Solskjær can’t guarantee Rashford will play again this season
Real news has value SUBSCRIBE