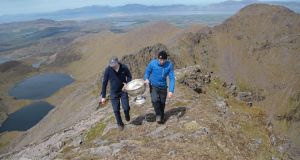 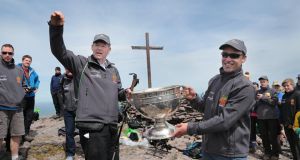 Because, for the first time since setting forth into the wild from Cronin’s Yard, a couple of hours earlier, there are doubts: the last thin skin of bog has been stripped away from our path, leaving only crumbly rock, spread like giant shark teeth, between us and the final stairway to heaven.

“This is tough,” Johnny Nevin says to Peter Canavan, who simply nods in agreement. Séamus Moynihan is a few steps ahead, offering some encouragement to Stevie McDonnell, and Mickey Linden has Sam Maguire strapped onto his back, which at this height, looks like a mattress balancing on a bottle of wine.

A few steps behind is Martin McHugh, with his son Mark, sharing a pleasantly satisfied look, and just behind them is Kevin O’Brien, who might well have considered himself a man of the mountains. And likewise Ja Fallon, sharing the moment with only himself, perhaps realising why being here had never been on one of his original wish lists.

Because it is here, after easing our way up through Hag’s Glen, taking large stepping-stones over the Gladdagh River and scrambling onto the Zig-Zags, steering just clear of the Devil’s Ladder, that climbing Carrauntoohil turns from prologue into monologue. The superabundance of energy is replaced by moments of personal hesitation, or reflection, especially for a group of near-total pioneers of mountain expeditions like this.

“I’ve never been up a mountain of any height,” Canavan tells me, “although believe me, I have fallen off plenty of them.”

Is it here, on a short plateau before the final ascent to the summit, and after two hours of steady climbing, that our great height first reveals itself. The whole country is now spread out under our feet, because here, in the heart of the MacGillycuddy’s Reeks – a mere 10-mile stretch of perfectly pure mountainous terrain, in the midst of the Iveragh Peninsula, starting at Kate Kearney’s Cottage, at the Gap of Dunloe, and running west down to Lough Acoose, and Glencar – lie nine of the 10 highest peaks in Ireland.

Escape reality
The one exception, the ninth-highest peak, is Brandon Mountain, just across to our right, on Dingle Peninsula; further off, to our left, is Beara Peninsula – our entire panoramic surroundings so devoid of any movement that they seem beyond the limits of society, and yet so vast and terrific that perhaps they don’t escape reality, but actually represent it.

There are, naturally, several different approaches to Carrauntoohil, some more demanding than others, but none of them easy, nor indeed perfectly safe. We take the eastern approach, via the Zig-Zags, accompanied by a dozen of Kerry’s finest mountain guides – not necessarily the easiest route, or shortest, but perhaps the most straightforward. The Devil’s Ladder, although a neat little short-cut, is far more treacherous, badly eroded now, and thus avoided – with its loose rock and constant stream of water, capable of wiping out your footing at any moment.

But why should there be an easy way to a mountain that, for centuries, no one dared to climb? The Reeks themselves, a great spread of glacial-carved sandstone, are better captured by their original name, Na Cruacha Dubha – the “black stacks” – and years of fracturing under the bedrock have resulted in the jagged edges and sheer gullies. All so surreal and yet so real.

Carrauntoohil’s own name has evolved too, from Ghearan Tuathail – “Tuathail’s tooth” – to be replaced by Corran Tuathail - “inverted sickle” – and it certainly has that look about it now. So it is here too that we are all reduced to putting one foot in front of the other, to reach our 3,406-feet peak (or 1,038 metres, in modern money): we are now touching the void and the sky, and yet blessed by a day sent straight from heaven itself, there is no turning back.

For centuries, men have measured themselves against mountains, from Henry David Thoreau to Christopher McCandless; and for centuries, mountains have measured men against each other, too. So, in the here and now, is also feels that nothing could be more emblematic of the GAA championship than climbing Ireland’s highest mountain, especially an 80-strong team representing All-Ireland medal winners from all 32 counties, along with the Sam Maguire itself.

The gentle irony is that while all 32 counties will reach this summit, only a handful of counties have a chance of reaching the championship summit next September, in either football or hurling. Yet the entire purpose and indeed cause of this expedition was to level the playing field, if only just for one day, and with that help develop a more consistent level field between the First and Third World.

Health projects
Because that cause is the Alan Kerins Project, which has already seen the former Galway hurler raise considerable funds for education, youth development, building projects, and other health projects in Zambia. This climb will help raise over €100,000, and Kerins will be a plane to Zambia, just 24 hours later, to personally deliver some of those funds to ensure they are immediately put to work. It was an idea that started out as somehow defining the impossible, or at least the idea that some things in the country will always be more difficult that bringing 32 All-Ireland winners to the summit of Carrauntoohil.

It’s never a sprint, either, it’s a marathon, although I can’t help reminding anyone who will listen that John Lenihan, Kerry’s own GOAT of a mountain runner – as in greatest of all time – once sprinted to the top of Carrauntoohil and back down again in one hour, 11 minutes and 43 seconds, one world record that may never broken.

Now, we still have to actually make it the top, before we all drop. It’s almost one o’clock, the sun now hanging directly overhead, laughing down on our good fortune, as we make the final ascent. Carrauntoohil may be the highest point in Ireland, but it’s one of the wettest and darkest spots, too.

For 300 days of the year the mountain is mostly invisible, surrounded by mist or clouds, and while May is typically the most inviting month, this expedition might just as easily have had to turn back, or not set out all at. In winter or summer, this mountain can, by turns of the hour or day, be touchingly calm or tortuously bleak.

Instead, the group slowly assembles on the summit in the sort of bright illuminated spread of light that, even to those of us who have been here before, can never become familiar. The summit is marked by a large iron cross and a small, square stone shelter, and as those All-Ireland medals are slowly pulled out and repeatedly photographed – including that won by Limerick footballer Malachi O’Brien, in 1887, thought to be the oldest All-Ireland medal in existence – nature provides its own drunken high to accompany the moment.

Then, with the back-slapping near complete, and no more than half an hour after the main group reaches the summit, there is one last vision in the bright light as Mícheál Ó Muircheartaigh skips up and over the last of the rocky path. At age 83 he made no promises that he’d see us at the top, although he never doubted himself, actually taking the Devil’s Ladder route to help ensure he didn’t fall too far behind.

If climbing Ireland’s highest mountain takes inspiration and perspiration, even for a group of All-Ireland winners, Ó Muircheartaigh, in that moment, provided both: with that he delivers a sort of impromptu sermon of praise on the mount that echoes around the high silence. That in turn prompts the chewing of the last of the soft Mars bars and the instruction to begin descent – traditionally the most difficult part of any mountain expedition.

“Relief, I think,” Kerins tells me, on the way down, when asked how it feels. “To have so many of my peers up there, that I idolised, and fought against, supporting this project, with their medals, is just very, very humbling. And having that Mícheál moment up there too was very, very special, magical almost.

“And what great company too. I just walked a bit of the way down with Richie Connor, and we spent the whole time talking about the 1982 final. It’s been a phenomenal to see so many All-Ireland medals up there. Like the McHughs, Martin and Mark, father and son, to have their medals up there? Someone was definitely looking down on us.

“And I don’t know if they fully realise the difference this effort will make, to hundreds of kids in Zambia and other parts of Africa, too. Education is the way forward, to give them the skills and belief that they can make a difference. It’s about giving them a hand up more than a hand out, to empower themselves. If one person has a skill that is passed on, that’s what can make a real difference.”

An inner peace and exhaustion greets all of us back at Cronin’s Yard, it’s near tea-time now, and the sun falling behind the last sighting of our now former summit. So we all give it one last glance, understanding this is what John Muir meant when he talked about the peace and freshness of mountains flowing into you, while cares drop off like falling leaves.

For further information on the Alan Kerins project see www.alankerinsprojects.org