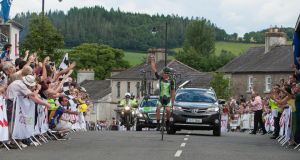 The An Post Chainreaction Sean Kelly rider was part of a group which went clear on the first of nine 19 kilometre laps of a rolling course in and around Multyfarnham, Westmeath. The move contained Mullen and two of his team-mates, Sean Downey and Jack Wilson, as well as seven other riders.

Crucially, many of the pre-race favourites missed out, including four-time champion Matt Brammeier (Synergy Baku), his team-mates Connor McConvey and Philip Lavery, Garmin-Sharp’s Dan Martin, Sam Bennett (Netapp Endura) and Martyn Irvine (United Healthcare). Martin chased with Damien Shaw (Aquablue) for several laps but was unable to get across before the finish.

Mullen attacked on the penultimate lap, and, with his rivals closely marked by his An Post team-mates, he used his time trial power to pull steadily clear. He hit he finish line one minute 14 seconds ahead of Downey and Paídi O’Brien (Team Osbourne Meats/The Edge), netting both the Elite title and the under-23 gold.

The success comes three days after he won the under-23 time trial and recorded the fastest time overall. He can now wear the national champion’s jersey until the 2015 championships. “It is going to be so good to wear this jersey for the next year. I can’t wait to get racing again in it,” he said.

The women’s and veterans’ races scheduled for Saturday had to be postponed due to a serious car accident close to the race route.