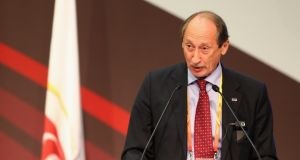 “I want to ask the IAAF to create a fairer balance,” he said at a VFLA session meeting before officially stepping down from his position. “When 90 blood tests are taken from Russian sportsmen and just nine are taken in Britain over the same period, this is unfair,” Balakhnichev added.

“The law of averages will work against us. It is unfair to concentrate all your attention on just a few countries.”

Russian athletes involved in major doping incidents will face disciplinary proceedings in the next three months as the sport bids to deal with a “crisis”, the IAAF said on Monday.

The IAAF and the World Anti-Doping Agency (Wada)begun a probe into Russian race-walking after a German television documentary, broadcast by ZDF/ARD in December, alleged widespread drug use. Balakhnichev denounced them as “a pack of lies”.

Balakhnichev did, however, admit the fight against doping in Russia was not successful enough. “The main problem is working within the regions of our country,” he said. “Up until recently, they did not take on any responsibility. For them, when someone got caught taking illegal substances, it was always a surprise.”

Balakhnichev confirmed his decision to step down as president. “I am handing over the reigns to the vice-president, Vadim Zelichenok, and the Federation is in good health. There are no debts,” he said. “The only problem is doping. It is also my right to continue my legal battle against the ARD television channel.

“I have no regrets about stepping down and I am not upset about anything. Everything that has happened is my fault,” Balakhnichev added.

Valentin Maslakov, who stood down as head coach of Russian athletics on January 23rd, will take on a new role in charge of the country’s sprint teams.