‘It would be misleading to say I knew his mental or physical strength. He has not been in touch for a long time’ 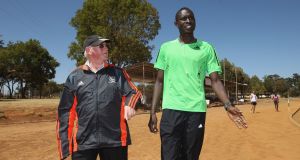 It was one of the most successful athlete-coach relationships of modern athletics, only now it seems David Rudisha has spilt from Brother Colm O’Connell, the Irishman who took him from the proverbial nowhere to become Olympic and World champion, plus world record holder, over 800 metres.

Rudisha is currently competing at Kenya’s Olympic trials in Eldoret, and while O’Connell is also present, he has admitted that “I have not followed him (Rudisha) closely for a long time and I don’t know whether he has been following our (coaching) programme . . . He has done very, very little training with me this year”.

Neither the coach nor the athlete has expanded on the exact reason for the spilt, although it appears to be somewhat cordial. O’Connell also told local reporters in Eldoret: “It won’t be easy for him (at the trials). He could be facing a great challenge. As much as people respect him for who he is and his command of running, but it won’t be easy.

“Although I know he is a very experienced athlete, I am not sure if he is mentally fit. It would be misleading to say I knew his mental or physical strength. He has not been in touch for a long time.”

Rudisha had struggled with his form at the start of the season, the 27-year-old fading to fifth in the Diamond League meeting in Shanghai in May, then only finishing fourth in Stockholm two weeks ago.

However, in his semi-final at the trials earlier on Thursday, Rudisha ran a massively impressive 1:43.34, the fastest 800m time of 2016, putting him well on track to secure one of Kenya’s three qualifying berths for Rio, and with that defend the Olympic title he won in world-record style in London four years ago, when he clocked that incredible 1:40.91 world record.

“It was important to qualify for the final,” said Rudisha, his 1:43.34 extra impressive given the mild altitude of Eldoret. “The race wasn’t easy and I had to push hard to win. But let’s see what happens tomorrow.”

Ferguson Rotich, who is leading on the Diamond League circuit and has emerged as Rudisha’s main challenger, won the second semi-final in 1:46.0, while Alfred Kipketer won the first semi-final in 1:45.2.

It’s now several years since O’Connell retired as headmaster at St Patrick’s School in Iten, high up in the Great Rift Valley, where he coached multiple Olympic and world champions, including another world record holder over 800m, Wilson Kipketer. He moved to Kenya back in 1976 as an Irish missionary teacher, and has lived there since.

He first discovered Rudisha in 2005, when running the 400m at a primary school competition, and although Rudisha attended a neighbouring school, in Kimeron, they established a close athlete-coach relationship which stood all the way through to last summer, when Rudisha won the 2015 World Championships, in Beijing.

The doping allegations surrounding Kenyan athletics over the last couple of years was something O’Connell was also conscious of, telling this newspaper: “I think of the old phrase, ‘tell me it isn’t so’, but it is so. Like a lot of people, I would always have considered the elite Kenyan distance runners to be clean. That image has been shattered. And as a coach, it definitely knocks a bit of the wind out of your sails.

“Of course David will be thrown into this situation, by some people. He knows that. No one is exempt from a side swipe here. I would like to think most people would consider David clean, when they consider his build up, where he came from. But I’m sure there are also people who are thinking ‘ah, now we know why David won the Olympics’.

“So David himself is very disappointed by all of this, because he knows it damages his reputation, too. He’s out there trying to market himself, Kenya, and all of the sport, then this happens. And it’s shaken him, no question. But one important thing is that these positive tests are coming from the road runners, not so much the elite track athletes.”